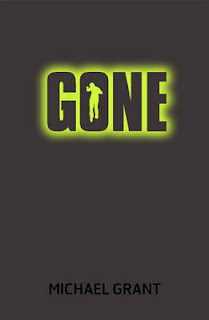 Suddenly there are no adults, no answers. What would you do? In the blink of an eye, the world changes. The adults vanish without a trace, and those left must do all they can to survive. But everyone's idea of survival is different. Some look after themselves, some look after others, and some will do anything for power...Even kill. For Sam and Astrid, it is a race against time as they try to solve the questions that now dominate their lives...What is the mysterious wall that has encircled the town of Perdido Beach and trapped everyone within? Why have some kids developed strange powers? And can they defeat Caine and his gang of bullies before they turn fifteen and disappear too?

It isn't until the world collapses around you that you find out what kind of person you really are. This is a chilling portrayal of a world with no rules.

Gone is probably one of the best young adult novels I have read this year and will definitely make the Best of 09 pile of books to reminisce about closer to the end of the year.

Right from the get-go you are caught up in the nightmare that breaks over the kids from Perdido Beach. One moment the teacher was there, yakking on about something and the next thing, he’s gone. So are all the other teachers…including kids over fifteen…

Initially everyone thinks it’s a bit of a joke, maybe it’s a very belated April Fool’s but then the laughter turns into panic and hysteria when the kids realise that their parents aren’t at home or at work, that all adults have completely and utterly disappeared – leaving them on their own, to fend for themselves.

At the middle of this living nightmare we find Sam, his surfer buddy, Quinn and fellow school mate Astrid who are doing their best to keep it together. Sam is convinced that he somehow has something to do with IT. Quinn just wants for things to go back to normal, he wants to see his mom and hit the surf, whilst Astrid is keen to find her baby brother, Little Pete who is autistic and could be in great danger and not even know it.

Sam’s character is that of the reluctant hero – he is scared that something he did, something he can unexpectedly do, something almost supernatural, is the cause of the adults disappearing. He tries to keep his thoughts ordered and thinks things through logically, step by step, as is witnessed by him sorting out help for a burning building, and then going into the building to help save a toddler – who in turn turns out to be a revelation. The toddler, like Sam is different. He is almost killed when the little girl turns on him, with fire spewing forth from her hands. Sam has no recourse and uses his own ability, to save himself and knock the little girl unconscious so that he can help her and carry her out of the burning building.

Sam the hero, everyone thinks, praising him, looking to him for further instructions, asking him for direction. It is an awful time and all Sam wants to is find somewhere quiet to think, to figure it all out, to make sense of it.

The entire novel is written with immediacy which helps keep the pace of the novel going at tremendous speed. There is also the mention of people nearing their fifteenth birthday and no one is quite sure what’s going to happen when they turn fifteen: do they get to stay in Perdido or do they disappear, like the adults? Does the nuclear power plant down the road have anything to do with the odd visible wall / sphere that appeared at the same time all the adults vanished, cutting off Perdido Beach (some call it Fallout Alley) from the rest of the world. Is the rest of the world still there? How many kids at Perdido can defend themselves with odd new powers? Why do they have odd new powers? Animals are learning to talk, mutating faster than years of evolution can account for.

There are thousands of questions to be asked in this scenario and by the end of the novel some are answered, but the majority aren’t – leading into a perfect segue for the next upcoming novel (is counting the time already).

The characters are well defined and carefully different from one another. Caine, on the other hand, the main antagonist is a nasty piece of work and tremendously charismatic. He has with him a group of kids from their exclusive private school on the hill, and he rolls into Perdido Beach and takes over as Mayor and set sup an infrastructure to help everyone...or so it seems, at first.

There is a lot of conflict, both physically and emotionally within these various characters and it is well paced, drawing back from becoming too me-me and instead focussing on the wider issue at hand – how to survive in a town, physically cut off from the rest of the world, when there is the requirement to feed and clothe everyone, make sure that order rules, that there are people looking after necessities like caring for the very young kids who can’t feed or clean themselves and more importantly, how to not lose yourself into becoming one of the bullies.

Gone is a good, strong, vivid read which I would recommend for older, more confident readers and those who do not suffer to greatly from nightmares! I also think that adults who read speculative fiction would enjoy this thoroughly – although the book is aimed at young adults and focuses on young adults in a dire situation, it is a very cleverly written book, highlighting society and the structure society imposes on us every day and what happens if that structure is removed.

I've just read this and I loved it!

I think this will be a good bookgroup read.

I'll definitely be getting this one, but I'll probably wait until the sequel is out too.