If I Stay, Gayle Forman 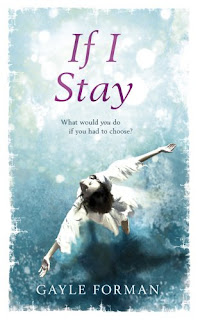 It follows seventeen-year-old Mia in the twenty-four hours after a catastrophic car accident. As Mia lies in coma, between life and death, her mind wanders back over her life – her eccentric family, her first kiss, her love for playing the cello – and now Mia must choose; life or death. Stay or go.

Here I am with my freaky synchronicity thing: friend and fellow blogger Adele Walsh over in the Land of Oz was telling me via Twitter about this amazing book which completely blew her away by its powerful writing and intimate story. I was intrigued and addded it to my Amazon wishlist as it looked like one of those Sunday afternoon reads whilst lying on the couch in the sun.

The following day, out of the blue, an email arrived from Random House UK asking me if I would be interested in reviewing this amazing book that has everyone in their office talking – it is called: If I Stay by Gayle Forman.

Icy cold shivers pawed their way down my back. Naturally I agreed and the next few days I spent reading If I Stay, during my commute into work. I kept in touch with Adele as I read it. I couldn’t help it. It is a buddy book. There is so much to talk about. It is also a highly emotional book and I spent a lot of time sniffling into a tissue, giving the impression to my fellow commuters that I am going through a tremendous ordeal of some sort.

If I Stay is wonderfully written and the story has a strong fresh voice. Of course there will be comparisons with Ms. Sebold’s work (The Lovely Bones) and with Jenny Downham’s book, If I Die. Unfortunately there is no way to avoid this as these two books have had a tremendous impact with readers of all ages, because of their subject matter and the skill with which the stories were told. And I would like to think that If I Stay will be seen as part of a trilogy of amazing books written by three very different authors who have such varying voices. But in the end, If I Stay should be looked at as it's very own creature and an expertly told one at that.
If I Stay takes place in the here and now and it follows the story of Mia on one snowy morning and how her life gets torn to shreds by a freak accident that leaves her in a coma in hospital and her family dead.

Pretty grim, you would agree, right? But there is so much more to the novel than this – the accident is a catalyst for us to find out about her life and see her decisions about her onward journey. As Mia lies in the hospital ward she recounts her story in a powerful but understated and fresh voice – her relationship with her family, complete with her ex-punk rocker dad and her mom who is a die hard rock chick and who still dresses the part, right down to her little brother Teddy who has aspirations of being a drummer too. Focussing on how different she is to her exuberant family we learn that Mia plays the cello, she has a penchant for world renowned cellist Yo Yo Ma and how she struggles to appear normal in her parents’s eccentric household. Although she is part of their family unit, and is very much loved and indulged, she still feels the odd one out, because of her music preference and also in her looks. She isn’t blond and noisy, she is dark and studious. We also meet her friend Kim and we learn how they became friends, after a drag out fistfight tussle at school. When we are introduced to Mia’s boyfriend Adam we find that here is a young man worthy of our heroine. They come from completely different places in their music – she is a cellist, he is the lead guitar player and singer in an up and coming rock band, but they have that incredible connection that makes their relationship fizz. Their relationship is written with great care and with subtle descriptions which are all pointers to something almost magical.

The back-story of Mia’s life (if you want to call it that) blends seamlessly with her current situation, where she lies in hospital, on the outside giving no indication that she is there whilst very much being aware of what is going on around her. We see friends and her extended family rallying around her and she watches as they struggle to cope with the loss of her parents and her baby brother, and the possibility of maybe losing her too. There are some gripping scenes written a restrained hand, never slipping off the edge into gratuitous melodrama.

If I Stay is a work of tremendous grace, courage and it is truly haunting. It can also be read on many levels, making it an unusually striking book to indulge in. I’ll make no bones about it – it should come with a warning: keep tissues at hand whilst reading. But even so, it a must read full of hope and promise and the sheer beauty of the language makes it a dream to read.

Find Gayle Foreman’s site here . She has set up a playlist to look at which I found really interesting – it reflects the relationships between Mia and Adam and Mia’s parents. Also, unless you know the artists, it’s a good way to find new favourite people to listen to.
If I Stay will be available in the UK on 7th May, as published by both Random House and Transworld. Gayle will also be visiting the UK for the release so if you get a chance to go and meet her, do!
Over in the States the feature film rights for If I Stay were acquired by Summit Entertainment (they did Twilight) and they’ve slated Catherine Hardwicke (Twilight director) to look after this project. Follow the link through to Catherine’s IMDB page and look at some of those critically acclaimed movies she’s had a hand in and you just know that she’ll be doing If I Stay justice.
Who wrote this? Liz at 11:29 am

Great review, Liz. I am glad that I was able to share this book with you, I think it makes it an even more special book for me!

One more thing - I sent the link for this review to Gayle and she loved it!

I just read an article about Catherine Hardwicke and how she might try and get Robert Pattinson and Kristen Stewart on board for this film. I think as they are good actors with wonderful chemistry between them it sounds like a good idea. They both being musically inclined also helps. Hopefully their schedules allows for it.

Yeah, I know, two years late....but I just saw this book online and wanted to read the summary. It sounds reallyyy good, and I'm going to go pick it up right away :)

I don't like the idea of Hardwicke doing the movie. She butchered Twilight, so I'm pretty positive she'll ruin this book as well. As for pattinson and stewart...pleaseeee don't let them do anymore movies together. She can't act. Period.

i agree very much with the last person that posted a coment. I'm dissapointed that Hardwicke is going to ruin another amazing book. If Pattinson and Stewart were in another movie together it wouldnt be taken seriously, it would just be another twilight series

I highly suggest that everyone read the sequel to this one, 'Where She Went'. I believe it takes place 5 years after 'If I Stay'. Just as powerful and profound as the first.
Thumbs up for both of them.