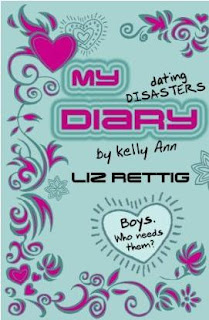 Kelly Ann is a total tomboy. She loves football and computer games and has no idea why anyone would want to bother with soppy romantic stuff and stupid crushes on boys. Her best mate is Chris, the boy next door, and he's not into that stuff either, is he?

Follow Kelly Ann's ventures into the crazy world of love through her stonkingly funny diaries.

In the mood to rock with laughter, to hoot with glee and shake your head as you cringingly remember your own self at age 14? Buy a copy of My Dating Disasters Diary by Liz Rettig, narrated in first person by the tremendously likeable and flippant tomboy, Kelly Ann.

Kelly Ann likes nothing better than to slouch around in baggy clothes, playing her Playstation or jumping on a skateboard to visit her friend Liz (who constantly tries to psychoanalyse her!) or her best mate, Chris who she’s known since they were teeny tots.

Kelly Ann is not a girly girl. She does not get the whole why girls like boys thing. She is happy to muck around on the football field with them, and to chat with them, but to have one of them as a boyfriend...she doesn’t quite grasp the concept. She is doomed to stay VL (virgin lips) forever it would seem.

My Dating Disasters Diary isn’t so much as diary about dating, it is about the quest to find a boy to go on a date with. Her approach is a bit heavy-handed and makes for hilarious reading. She is one of those girls who slightly intimidate boys – she can run, climb, play as fast as they can and she knows her Playstation games backwards and forwards. She doesn’t know how to turn her head sideways and stare at someone adoringly, unlike all the other girls in her school. She doesn’t quite get flipping the hair to one side and giggling inanely, whilst staring at subject of adoration in well, adoration.

Add onto this two parents who are as funny and eccentric as their daughter and a sister who make Kelly Ann believe she’s been adopted (who goes to college wearing a knee length skirt and white blouse buttoned to the top and then comes home with a new boyfriend in tow, an American bible basher, to boot!?).

The cringeworthy incidents in MDDD are too long to catalogue but there is a spectacular scene involving the Prince of Wales, toothpaste used as spot remover and a pair of Winnie the Pooh pants worn on the head. Liz’s writing style is tongue in cheek and the book moves along at a good pace, broken into short punchy diary entries which never varies in tone.

For instance, this little gem nabbed from Liz's site:

There was a pool party tonight for adults and older kids with a free buffet and cheap drinks. Everyone went.

Had a great time until two of the reps announced the start of the karaoke.

They were first up. Dad sang 'Sex Bomb' while thrusting his hips back and forth energetically. Mum didn't sing. Instead, she circled round him, writhing about suggestively and waving her sarong.

I am never, ever going on holiday with my parents again. Even if social services have to take me into care for two weeks and I'm beaten to a bloody pulp every night by the other kids because my mum isn't on methadone and I know my dad's name. Never.

My Dating Disasters Diary (by Kelly Ann) by Liz Rettig is the perfect summer read – there is lots of heart and hilarity and even some action adventure (but only a little). Find Liz Rettig’s equally hilarious website here with some rib-cracking excerpts from the diary posted on the site. Please note that My Dating Disasters Diary will only be available in the stores on 7th May and is published by Corgi Children's Books UK..
Who wrote this? Liz at 9:36 am

I'm reviewing this soon too. It made me laugh a lot!

Och, you know some books are funny and amusing but this is just that one step beyond, straight into rocking belly laughs. I love the author's site too. So funny.