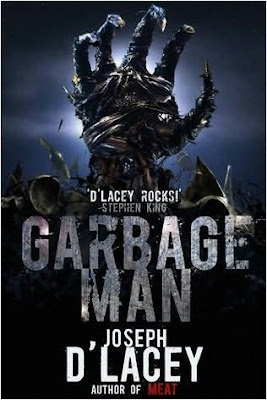 Until I closed the covers on The Garbage Man, I’d never really paid much attention to the assorted leftovers and rubbish I’d shove into the bin at home; it had always just been one of those little chores that simply needed doing. But now..

Joseph d’ Lacey has given birth to an insidious creation, one whose touch lingers long after you’ve turned the lights off. A subtle tension permeates everything; even in the calm before the storm, when the cast of characters are playing out their hitherto unremarkable lives, there’s an unmistakeable feeling that everything is about to hit the fan.

At the centre of the web sits Mason Brand, an enigmatic loner with a relationship with Mother Earth bordering on incestuous. Joseph shepherds Mason and rest of the cast along at a commanding pace, letting the darkness seep into their lives as they head inexorably towards their respective fates, many of which are wonderfully unpleasant. No one is safe..

The birth and metamorphosis of what rises from the polluted earth brings with it some of the most vividly savage imagery I've had the pleasure of coming across in a good long while.

All in, I was very impressed indeed -it's a wonderfully visceral horror that deserves to be bought and devoured by anyone with a taste for the macabre.

I've added Meat, his previous novel, to my wish list- if it it's anywhere as fun to read in a darkened room it'll be a crime to miss it.

The Garbage Man is due out for release from Bloody Books (Beautiful Books) on 7th May 09. Watch out for an upcoming interview with Joseph D'Lacey in the next few days, to further celebrate all things horror during our April and May month horror fest.
Who wrote this? Mark at 10:05 pm