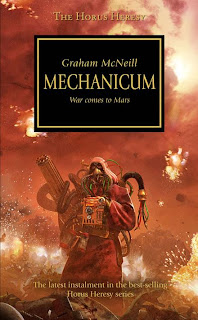 As the flames of treachery spread outwards through the Imperium, Horus mobilises those forces who are loyal to him, and plots to subvert or destroy those who stand agaist him. A battle is being fought for the heart and soul of all the Imperial forces – the Astartes, the Imperial Army, the Titan Legions and more. In this epic story, author Graham McNeill tells the story of the civil war on Mars, and the genesis of the Dark Mechanicum.

For those not familiar with the Horus Heresy, thee quick version is this (shamelessly borrowed from The Black Library):

Led by the Emperor’s superhuman progeny, the primarchs, the vast armies of Earth have conquered the galaxy in the Great Crusade. The Emperor’s elite warriors, the heroic and battle-hardened Space Marines, have smashed all aliens, tyrant despots and traitors into compliance. Gleaming citadels of marble and gold celebrate their many victories. Triumphs are raised on a million worlds to record their epic deeds, but such vainglory will not last…Rebellion looms when the Primarch Horus, he who once stood by the side of the Emperor, is tempted by the Chaos gods. Horus’s defection will shake the foundations of the nascent Imperium and take it to the edge of annihilation. As the flames of war spread across the galaxy, mankind’s champions will be put to the ultimate test, as brother faces brother and the universe trembles with the beat of war.

Mechanicum, the 9th book in the Horus Heresy series, picks up at the point where Horus’ treachery is coming to fruition, his plans in motion and the rebellion spreading.

We are introduced to the industrial wonderland that is Mars via Dalia Cythera, a hitherto unremarkable scribe, one of the faceless millions who keep the paperwork for the Imperium churning over. Singled out for her heretical habit of trying to improve the technology around her, she’s brought to Mars in the hope that her unique talents could help unlock the secrets of a secret project Adept Zeth had been ruminating over.
A project that could change the future of mankind forever.

At the same time, Horus’ minions have come to Mars, seeking those of a similar mind to corrupt and lead astray from the path laid out by the Emperor. Knowledge is power, but it’s also addictive, a weakness which Horus will not hesitate to exploit..

Graham has done a very good job of bringing his vision of Mars to life, which makes the brutality and unrelenting savagery of the civil war that erupts all the more vivid and engaging. War will engulf Mars, a war perpetrated by those who have access to the most lethal weapons and nigh on limitless resources; it’s a catastrophe of the highest order, an epic bodycount in the true spirit of the 41st millennium -and a very worthy addition to the series.

You can read a sample extract here.

Thanks to the generous team at the Black Library, I have a shiny new copy of Mechanicum to give away – all you need to do is email me (details on the right) before anyone else does!
Who wrote this? Mark at 8:12 pm