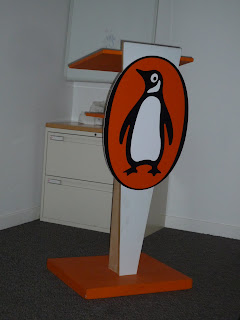 Mark and I were very flattered to be invited to Puffin's New Voices evening on Monday, 9th November.
Authors in attendance were: Jason Bradbury, Alex Scarrow, Helen Grant and David Yelland. We also got to meet the lovely Jenny from Wondrous Reads whom I've only, up until now, chatted to via email and on Twitter.
The evening started with the super-energetic and fantastically erudite Jason Bradbury chatting about his upcoming novel: Atomic Swarm, the second novel in the Dot.Robot series which started earlier this year with Dot.Robot. He showed off some genuine technology he has the kids play around with in his novel. The story sounds cracking and I can't wait to read my copy of Dot.Robot and then it's follow up novel. 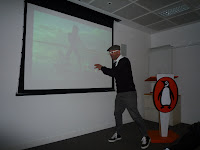 Jason showing off his hoverboard moves. 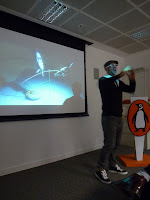 Jason trying to explain how the robot behind him in the slideshow does surgery.
Next up was Alex Scarrow whom I knew two things about already: i.) he's an adult thriller writer of some acclaim and ii.) his brother is the Simon Scarrow. But we didn't hold that against him. Alex had great fun expounding on the storyline of his upcoming novel called TimeRiders in which timetravel is real and the characters have the opportunity to backwards in time to fix things. A fantastic concept and I personally was riveted hearing about it. Needless to say, listening to both Jason and Alex talking had me yearning to haul out a moleskine and write. Fantastically inspiring authors do that! 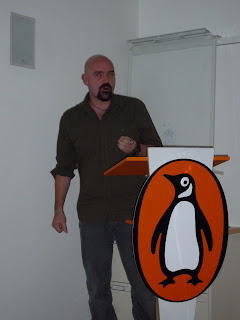 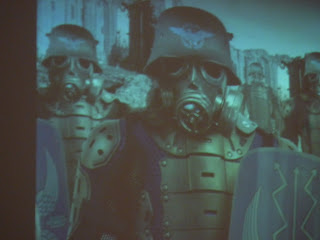 What would happen if the Roman Empire just kept on growing into modern times? An interesting idea from Mr. Scarrow.
Third up we had the talented Helen Grant who greeted the audience in German, much to our consternation. But as she chatted about her new upcoming novel, The Glass Demon, it all came together and made perfect sense. I've not yet read Ms. Grant's previous novel, The Vanishing of Katharina Linden but I shortly will be, hopefully over the Xmas break. I suspect I may have done myself a disservice by leaving it this late! 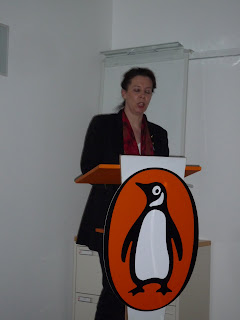 Helen Grant chatting about The Glass Demon out from Puffin in 2010.
Finally, and the biggest surprise to me, was David Yelland, talking about his upcoming novel called: The Truth About Leo. David's talk was incredibly intimate, frank and direct and I felt my heart go out to him and I for one, cannot wait to read The Truth about Leo. He warned us that it was going to be something that the media was going to have a field day with, maybe for the wrong reasons. I thought his honesty was refreshing, as was his talk - it was inspiring and it made me like him a lot, flawed human bean as he is. I won't go into all of his talk, as I'm sure you'll hear all about it in other media soon enough, but I for one felt quite flattered to be part of the audience who sort of "heard it first" and who didn't have it filtered between middlemen. The novel sounds amazing - and I'm hoping to get a review copy soon in order to devour it. 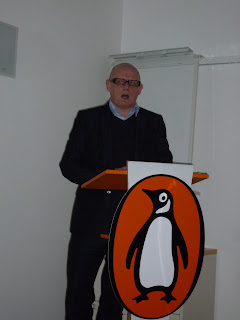 David Yelland talking earnestly about The Truth about Leo.
The evening was such good fun - we got to talk to so many of the Puffin people who work so hard behind the scenes. It was fantastic seeing their enthusiasm and it in turn enthused us. I managed to grab a copy of The Glass Demon and TimeRiders to read. I've already started on TimeRiders this morning and you know, I am loving it!
Thanks to Tania, Jayde and Hannah for inviting us and for looking after us bloggery types!
Now for a random giveaway!
We have got two party favour "things" to give away from the Puffin event. I'm not saying a single word about what they are - only once the winners have been announced will I reveal what they are!
So - comment here and tell us about any book you are looking forward to in 2010 - it can be any book, any publisher, US or UK, adult or kids, any genre. Entrants are UK only, I'm afraid. I'll let the competition run till Friday, say around 3pm UK time, when I'll get a colleague at work to randomly choose a winner. Be sure to check back here when it's announced so that you can contact me with your details if you are the winner!
Who wrote this? Liz at 10:38 pm

There are so many to pick from... but this morning, I feel most excited about the third book in Patrick Ness's Chaos Walking trilogy: Monsters of Men (Walker), estimated pub date May 2010, I believe. I absolutely loved the first two, heard him speak in Cambridge a couple of weeks ago, and am now looking forward even more to reading the end of the story.

It has also taught me the harsh lesson not to start reading a series when there are still books to be published - the pain of the wait can be too great!!

I've just found out that Kate Morton's 3rd novel -- The Distant Hours -- is out early 2010 so I'm really looking forward to that, having read her earlier 2 books -- The House at Riverton and The Forgotten Garden, and loved them both!

Normally the must have read of any year would be the new Fred Vargas but for the first time in a few years there's not one :(. My second favourite therefore is The Snowman by Jo Nesbo out in March.

I am realy looking forward to Beautiful Creatures, which is due out in Feb 2010 and of course is published by Puffin. Amazing gothic love story

Plus, Before I Fall by Lauren Oliver in May, this books sounds truly amazing and I cant wait to devour it!!