The Hidden Oasis by Paul Sussman 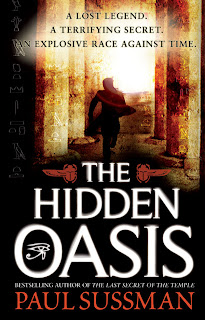 Egypt 2153 BC Eighty priests set out under cover of darkness into the western desert, taking with them a mysterious object swathed in cloth. Four weeks later, having reached their destination, they calmly slit each other’s throats…
Albania, 1986 A plane takes off from a remote airfield, bound for the Sudan. On board a cargo that will forever change the Middle East. Somewhere over the Sahara the plane disappears…

The western desert, the present day A group of Bedouin discover a mummified corpse half-buried in the dunes. With it are a roll of camera film and a miniature clay obelisk inscribed with a curious hieroglyphic sign…

Three unconnected events Or so it seems until Freya Hannen arrives in Egypt for the funeral of her sister, a desert explorer who has inexplicably taken her own life...
For Freya it is the start of a terrifying, life-or-death adventure - one that will lead her and Egyptologist Flin Brodie deep into the forbidding wastes of the Sahara. Their goal: one of archaeology’s greatest mysteries and the astonishing secret at its heart…

I'll just confess it now: Paul Sussman is an excellent writer and definitely one of my all time favourites when it comes to writing action/adventure quest novels such as The Hidden Oasis. If Olympic medals could be distributed between three authors I would have to rate Paull Sussman, David Gibbins and Chris Kuzneski to be the three to duke it out for the gold.

In The Hidden Oasis we quickly get up to speed with what the lost oasis is, the mythology and the legends about it. Kitab al-Kdnuz, "The Book of Hidden Pearls," describes Zerzura (the hidden oasis) as a whitewashed city of the desert on whose gate is carved a bird. The treasure seeker is advised to "take with your hand the key in the beak of the bird, then open the door of the city. Enter, and there you will find great riches...."

In Flin (Flinders) Brodie we have a capable, intelligent archaeologist, but someone with an impossible dream, verging on obsession: discovering the lost hidden oasis of Zerzura. He is likable and as a character he works well as he comes across as dependable and for all his angst and hurt about a previous misdeed (which lead to some severe bouts of drinking in the past) you feel both empathy and a connection with him as one of the main characters.

Freya Hannen is the epitome of the outdoors girl: a rock climber, steady thinker, not one prone to dreaming. She initially comes across as a bit harsh, quite self-reserved, someone who holds in a lot of emotion, and only feels alive when she's out there scaling impossible rock faces.

Freya's trip to Egypt, for her sister Alex's funeral is made more poignant for the fact that something had happened in the past to estrange these two women. Alex never gave up on Freya, constantly writing to her younger sister, telling her about her own desert exploration and what's happening her life. Freya never once responded.

Freya's discovery that someone may have murdered Alex sets off a sequence of events culminating in her hitching a ride to Cairo and meeting up with Flin (whom she had met at Alex's funeral as Flin and Alex were good friends, exploring the desert together) in order to seek help. Freya slowly becomes more human to the reader, her self restraint slips and we find her to be a genuinely nice, if slightly flawed human being. Her stubbornness not to let go of the idea that someone murdered Alex and to see things through, no matter what, is fantastic and I cheered her on with great gusto.

Events steamroller into a nightmare situation in which Flin and Freya are on the run from a truly unpleasant Egyptian businessman who is keen to find the missing plane and its valuable cargo. We learn that Flin isn't all he appears to be and part of the story behind his previous bouts of drinking. It makes him a fuller, rounder character, and one I felt great empathy for.

The author contrasts wonderfully the dreamer and the realist here, using Flin to lead Freya through the highly fantastic concept of the oasis, the desert exploring and the tantalising pieces of information they have about Zerzura.

The Hidden Oasis is a chunky read (in size) but to be honest, it didn't feel like it as the writing and plotting just never lets you down. It is paced very well with a few genuine surprises which had me going "!!!" a few times and shouting at the characters (always a good thing).

If you've read Mr. Sussman's two previous novels: The Last Secret of the Temple and The Lost Army of Cambyses, you would be familiar with Inspector Khalifa. And if like me you expected him to pop in and fix everything in The Hidden Oasis, you need to be warned: he makes a very small cameo appearance only. But it made me smile regardless so the author is forgiven.

Apart from my loyalty to Khalifa and the first two novels, which are truly excellent, exhaustively researched and overall well written reads, I would have to say that The Hidden Oasis is the best by these three by far. I loved the mystery of the oasis, the utterly insane improbable location and subsequent events that develop and yet never once did I feel that I was being duped or failed to suspend my disbelief. It's a thrilling ride and one I'd highly recommend fans of the genre to pick up and read - or to try as an introduction to the genre, should you feel in the mood for something different this Christmas. You won't regret it. Trust me.

The Hidden Oasis is due for release on 19th November 2009 published by Transworld (Bantam imprint).
Who wrote this? Liz at 9:12 am