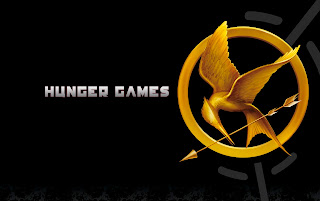 I don't do this often.  Well, not at all on the blog anyway, but I felt the need to just put this out there for a change. Malinda Lo whom I adore, wrote a great blog about the controversy about who the directors chose to play Katniss in the upcoming Hunger Games movie.  See her blogpost here. My little blogpost is about something altogether different. But it is the same.  A bit.

I am a big fan of the Hunger Games and much has been made of the casting of the very pretty and very talented Jennifer Lawrence as the main character, Katniss Everdeen in the HG trilogy.
﻿
﻿
Personally, I'm not too fussed about her being blonde or what the majority of readers expect her to look like.  All I want is someone to do this fantastic female character justice and if anyone can, Jennifer Lawrence will do that.  She has an amazing screen presence and with the right training, will be able to live up to Katniss's agility and prowess as hunter / gatherer and fighter.

However, I submit to you someone else who has completely blown my socks off in the movies recently. And I think she would have rocked our world as Katniss.

I was lucky enough to attend a preview screening of Tomorrow, When the War Began here in London with some Quercus people, some press/media folk and also, the lovely Bookette.

I am not a watcher of daytime TV and cannot remember the last time I watched a soap of any sort.  So I was completely unaware who the actress was who takes the lead in Tomorrow - Caitlin Stasey - a seasoned actress from a variety of shows in her native Australia.

Caitlin represented to me what Katniss Everdeen should a) look like and b) act like where you are taken from "ordinary" circumstances and forced into extraordinary circumstances. Wonderfully underplayed and full of pathos, we are with Ellie and her friends as things escalate from a normal life into something practically unthinkable and some very uncomfortable questions about war are asked.

If you have not heard about Tomorrow when the War Began (books by John Marsden and movie out in the UK shortly) I will urge you to read / watch it.  As for the movie, It is not a dystopian movie.  It is a pre-dystopian movie about an unexpected invasion by coalition forces into a plentiful Australia. Before the invasion in the movie, it is a normal world and our characters lead normal if slightly tougher lives than many of us may know.  This gives them the resilience to become the lone fighters they evolve into during the course of the movie.

So, back to Caitlin/Ellie - this is who I would have loved to see in the role of Katniss Everdeen.  She proves that you can be tough, thoughtful, strong, individual and courageous without having to act like a mini-male.** Also, she knows how to handle herself in a fight.  She's pragmatic, a tactical thinker and kicks butt but she is also sensitive and strong and caring.  A great combination for any kind of heroine to have in any kind of action movie.

And I think that as much as I'd love to see Caitlin in the role of Katniss, we should be grateful that the producers and director chose Ms. Lawrence because boyo, the girl can act.  And if it's a toss-up between looking "right" as the fans perceived Katniss to look, and for the actress to give a creditable performance in the role (everyone can train to be proficient in weaponry and fighting, look at Saoirse Ronan in Hanna who is a tiny slip of a thing) then I'm completely for the pretty blonde chick who can actually act, especially as she can be tanned up a bit and her hair dyed. Who knew that old Legolas in LoRT was actually a buff tanned boy from Canterbury with dark hair and eyes? Although...let's not talking about acting skillz in this instance.
﻿﻿
﻿﻿In the meantime, for everyone waiting impatiently for THG to start filming and obsess about, hunt down the books for Tomorrow when the War Began and watch the movie when it comes out.

Links to:
Trailer for Tomorrow When the War Began
Trailer for Hanna
**Mini-male clarification from my point of view: Thanks to Anonymous who commented on this: what I meant by mini-male was, a lot of writers tend to create heroines with no femininity, basically using a male hero as a template and just placking on girl-bits and some emo-emotions.  This of course, is very wrong and reprehensible! Both Katniss and Ellie are great rolemodels, super lovely and very feminine yet tough and strong and independent.  True heroines in my eyes.
Who wrote this? Liz at 12:00 pm

I do think the actress you mentioned looks a lot more like Katniss that the first one. I can't wait to see Tomorrow When The War Began. The adorable Keris is sending me her copy to read. It all sounds very exciting.

Interesting post. I must say, I'm thrilled with Jennifer Lawrence being cast as Katniss because she will act the daylights out of the roll. You know, regarding the mini male comment...obviously referring to Katniss and yes, the gender roles are flipped in this story. Katniss definetly takes on the role that is traditionally male...but that is what I love so much about the books and the character of Katniss. Katniss is an unsual heroine and if she has the characteristics of a mini male, it's because she took on the role as head of the household...the paternal role after her father was killed. Her father taught her how to hunt and gather and so she supported the family...Prim already had the maternal instinct. However, what's interesting about Katniss, is that while she took on the responsibilities of her father, I don't think she ever lost her femininty. Capable, tough, responsible while providing for your family in a hardscrabble environment is what makes Katniss so interesting to me as a character.

Caitlin's a bit too old, but it seems like she could have made a great katniss if the movie had been made earlier.

Oh, she does have a "Katniss look" to her. I think the one character that will be cast far from what I pictured is Peeta. I can see Katniss in Jennifer Lawrence. All of the suggestions I have seen for Peeta, though, have been way different than the version living in my head.