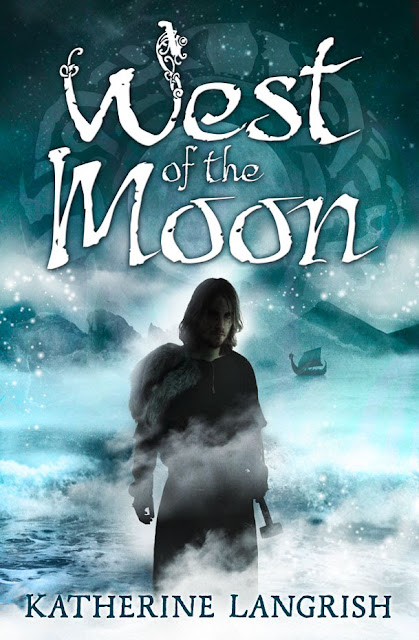 I have been a big fan of Ms. Langrish's Seven Miles of Steel Thistles website for some time, especially the series she ran on recently on "Fairytale Reflections" in which she chatted to a variety of amazing authors about fairy tale reimaginings, favourite tales and influences, amongst other things.  I was also very keen to read Kath's novels for younger / teen readers the Troll Fell books.  But I heard a rumour that the books were going to be combined into one book and so I waited.  And waited.  And then unexpectedly Kath asked me if I wanted to be part of the blogtour to celebrate the release of the updated combined 3 Troll Fell novels and I gibbered insanely and of course, I agreed.
I devoured West of the Moon in a few sittings.  I had been going through my phase of Norse and North European fairy tales at that stage and so this slotted straight in there in what I was reading for my own research and enjoyment.
But here's the thing: the review I'm about to write isn't about the whole book.  I'm keeping that review for later when I run my annual "Viking Week" event later this year.  What I will be reviewing is the first book in West of the Moon, the original Troll Fell novel which, in my humble opinion is one of the best openings to a series for younger readers that I've read in a long old time.
It starts like this:

The Coming of Uncle Baldur


Peer Ulfsson stood miserably at his father's funeral pyre, watching the sparks whirl up like millions of shining spirits streaking away into the dark.

Dizzily he followed their bright career, unwilling to lower his eyes. The fire gobbled everything like a starving monster, crackling and crunching on bone-dry branches, hissing and spitting on green timber, licking up dribbles of resin from bleeding chunks of pinewood.

The heat struck his face and scorched his clothes. Tears baked on his cheeks. But his back was freezing, and a raw wind fingered the nape of his neck.

Father! thought Peer desperately. Where have you gone?

Suddenly he was sure the whole thing must be a bad dream. If he turned round, his father would be standing close, ready to give him a comforting squeeze. Behind me - just behind me! thought Peer. He turned slowly, stiffly, wanting to see his father's thin, tanned face carved with deep lines of laughter and life. The black wind cut tears from his eyes. The sloping shingle beach ran steep and empty into the sea.

A small body bumped Peer's legs. He reached down. His dog Loki leaned against him, a rough-haired, flea-bitten brown mongrel - all the family Peer had left. Friends and neighbours crowded in a ring around the pyre, patiently watching and waiting. Their faces were curves of light and hollows of darkness: the flames lit up their steaming breath like dragon-smoke; they blew on their fingers and turned up their collars against the piercing wind.

The pyre flung violent shadows up and down the beach. Stones bigger than a man's head blackened and cracked around it. Hidden in its white depths his father's body lay, folded in flames.

I found the opening scene to Troll Fell utterly devastating.  Peer's reaction to his father's death felt very vivid and very clear to me.  I ached for him.  But I was also deeply intrigued.  The funeral flames had not even reached their climax when a large thumping and incredibly brutish character turned up in the shape of Uncle Baldur, not even an uncle Peer knew he had.  It turns out his father had walked away from the life he lead at the mill he grew up at, as he just could not stand being with his step-brothers.  And sadly now with Peer's father's death, the uncles can lay claim to Peer's inheritance and he has to go and live with them in their rundown mill.
Ms. Langrish took great care crafting these odious uncles.  Very little redeemed them.  They were careless ruffians with uncouth manners, being incredibly selfish and they clearly believed the world had done them wrong and therefore everyone (and the world) owed them.  It is not a far stretch of the imagination to figure out the kind of life Peer would lead with them.  He effectively becomes their slave and he has to labour in the mill whilst they go about their business of being scruffy individuals.


Peer makes friends with a vibrant and lovely young girl, Hilde, who lives near the Mill with her parents and younger siblings. Hilde is the type of heroine we want to read about: steadfast, funny, quick to make friends, reliable and competent. She's also a thinker and fast on her feet.  She meets Peer and realises that he is nothing like his vile uncles and of course, the friendship that develops between Peer and Hilde takes some time, but it is a steady one.
In the world of West of the Moon what are supernatural beings to you and I are real dangers to the human  inhabitants.  Trolls, creatures who live in lakes, hobgoblins and creatures from folklore and legend rub shoulders with humans on a daily basis and it is when Hilde's dad decides to go a-Viking, that the trolls start wreaking havoc around their small farmstead. Tie that in with the animosity between the two louts at the mill and Hilde's family, and there is a recipe for conniving and high jinks.
There are times that you read a book and you can tell a writer is a storyteller.  Ms. Langrish is a storyteller - she relishes the stories and the legends of things that go bump in the night, mixed with rich folklore and mythology.  And her characters are all also storytellers.  There are stories within stories here - parents tell stories to children, friends tell stories to each other.  It really enhances Troll Fell making it more than the sum of its parts.  My only complaint would have been, if I had been a first time reader of the series, that the wait between books 1 and 2 and 3 would have seemed far too long.  Although Troll Fell wraps things up quite neatly in itself, you do realise that there is a bigger story being told than just Peer and Hilde's stories. I look forward to sharing with you what happens in books 2 and 3 during my Viking Week later this year.
Enough from me, here is my guest post from Kath Langrish about the craft of writing and the folklore used in West of the Moon.

What is the hardest part of the writing process?


Making a start! You know, in the fairy tales, when the princess has to climb the glass mountain? That’s the way it feels when I set about writing a new book. There’s this ghostly, glassy, perfect pinnacle rising up and up ahead, wreathed in mists and it can be very daunting. It’s so difficult things getting the beginning right, and I can never go on until I’ve got it right, it’s like a launch platform. I generally go over the first few pages anything up to thirty times before I’m happy with them.

What about the folklore in your books – do you do much research?

I do, and I love it. That’s one of the best parts, spending hours wrapped up in old books of folklore and fairy tales. For ‘West of the Moon’ I read widely in the Norse tradition – not myths about gods, but tales of trolls and neckans and water spirits - for example the fearsome draug or draugr (pronounced roughly droirer with a rolled r) who sails the seas in half a boat with a crew of drowned men. His scream foretells storms and doom. And there’s also a Native American element of folkloric personages, mainly from the traditions of the Mi’kmaq of New Brunswick and Nova Scotia, including the jenu: a sort of cannibal ice giant. I spent about six months in the Bodliean researching those tales!

How would you finish this sentence: A successful author is someone who…


How do you measure success? Somehow it keeps moving ahead of us, like the horizon you never quite reach. Before I was published, success meant simply that – getting into print. Then, of course, you start to measure success against better sales, or higher profile, or awards. But in fact, I’d say a successful author is someone whose books you want to re-read.

What are you writing next?


I’m about to begin taking the first few slippery steps up the glass mountain. My next book (or two: this may well spill over into a duet or a trilogy) will have a very different kind of setting: a drowned London three hundred years into the future. I have some strong characters I’m getting to know, and there’ll be mythical and folklore references as well as a sci-fi feel. I’m very, very excited about it…

Do you have any advice for aspiring writers?


Please take the time to think. Thinking is just as much part of creating a novel as actually setting the words down. Don’t feel pressured to start too early, and don’t feel guilty if you’re not hammering out those two thousand words a day. (Me? I sometimes don’t write more than fifty. Or I end up with fewer words at the end of the day, because I’ve been cutting and unpicking.) Often, if you get stuck, it’s a sign that you’re veering off course with the book – maybe trying to force a character to do something they wouldn’t. Give yourself time out. Go off and do something different and let your subconscious mind come up with the answers.

What a great bit of advice in this last section - it is all really very pertinent to my current situation!
**COMPETITION TIME**
I have ONE copy of West of the Moon to give away and I'm throwing it open iinternationally. Yes, people - world-wide.  In order to be counted as an entry, recommend to us some of your favourite reworkings of mythology/folklore/fairy tales.  I have an insatiable appetite for these and I know a lot of readers on MFB are the same.  So share what you've found and remember, when entering, leave some way for me to get hold of you via email or Twitter.
The competition will run from today, 18th March to next Friday, 25th March.
Be sure to follow Kath and her blog-tour to Girls Without a Bookshelf on Monday, 21st March 2011.

I loved West of the Moon. The first part with Peer's uncle was devastating, you are definitely right there.

I remember working my way through Andrew Lang and then Roger Lancelyn Green. The books came from the Country Lending Service - a free postal library service for children in deep rural areas of Australia. I asked for more "like that" after they sent the first Lang. I was given Anderson and Grimm and Perault to read later but they did not equate with that first reading of Lang. I think I was about six at the time.

I think my favourite myth re-telling is a Camelot 3000 by Mike Barr and Brian Bolland. It's a 12 issue comic book series. And if you haven't read it, you really should :-)

Thanks for the contest! I love reworkings of fairy tales, too! I just finished "Tender Morsels" and I loved it! I think you would, too! It's a tad dark at the beginning, but it well makes up for it! Thanks so much for the contest!
apereiraorama[at]gmail[dot]com