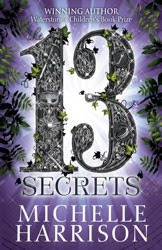 Synopsis
Red is now living at Elvesden Manor under her real name, Rowan, and trying to put her past behind her. But staying on the straight and narrow isn't as easy as she had hoped… Hounded by fairy messengers who are trying to convince her to participate once more in the changeling trade, Rowan is haunted by dreams of the Hedgewitch's cottage and the chained-up Eldritch, who threatens revenge against her. Her past is about to catch up with her - can Tanya and Fabian prevent it consuming her altogether?
Both Liz and myself adore the previous books in this series: The Thirteen Treasures (reviewed by Liz) and The Thirteen Curses (reviewed by me). Therefore, The Thirteen Secrets was one of my most keenly awaited releases of this year. It was with some trepidation that I sat down to read. I mean, I couldn't wait to read it but once it's done that's it. My sadness at the series potentially ending was completely diminished though by this brilliant book. I like my fairies to be wicked, nasty characters full of self-interest and mystery and Michelle Harrison certainly doesn't hold back.
Red has always been a secretive figure. We learnt more about her in The Thirteen Curses but there's much more to discover in 13 Secrets. For example, we know she slept rough for a long while but we find out what she was doing during that time and what exactly was involved in her mission to sort out changelings. One of the strengths of this series for me is that it blends an almost old-fashioned sort of story which aching realism. So although we never see a character look at a t.v. or use a mobile phone we do see what happens when families break down or real cruelty by parents. Red, or Rowan as we know her now is clearly worried. Although she's found a home at Elvesden Manor she spends her time checking her line of salt protection once she's in her bedroom. She has found a level of peace though which is quickly interrupted by an unwelcome voice from the past.
Tanya and Fabian are on hand to provide support and both of them have grown up. In fact, The Thirteen Secrets is a very mature book. The series as a whole has never shied away from the dark side of fairies but the final book is the hardest hitting. As events unfold I felt a real sense of dread at what was going to happen next. I worried whether my much-loved characters would actually make it through to the end. All of my favourite fairies return and I particularly loved the exploration of guardians and how they come to be. As I was reading I was reminded of real fairy stories, the ones by Grimm and Anderson that haven't had their edges softened to make them acceptable to today's audience. There are no filmy dresses and pretty wings in The Thirteen Secrets but there's plenty of heart, grit and fabulous story telling. Rowan has to face up to her past actions one of the themes of the book is that there's no getting away from what you've done - it's always waiting to catch up with you. As sad as I am that the series has finished I couldn't have wished for a more gripping ending.
Dark, gorgeous and quite frankly glorious. If you're on the fence, do dip in and give this a go - I don't think you'll be disappointed.
Who wrote this? Essjay at 7:30 am

Totally fantastic review. I am looking forward to reading the series alongside the 10 year old :D

An excellent review. You drew me in right from the beginning. Lovely

I am so excited to read this one! I have just finished the last two and loved them!