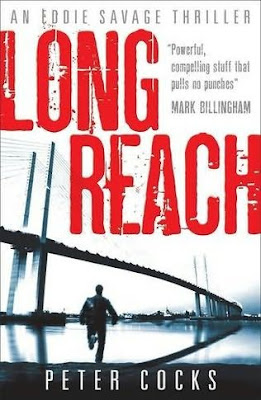 Walker Books will go undercover on 2nd March in a bid to get London reading for World Book Day. Peter Cocks, author of the East-End gangland novel Long Reach, will assume the identity of Long Reach’s Godfather-esque gangster Tommy Kelly and drive a white van (what else?) through London’s East End distributing 2,000 exclusive Limited London Edition copies of his new novel.

The drop-offs will target teens and adults and include ten schools, fire stations, doctor’s surgeries, police stations and boxing clubs in Newham and Deptford; both key locations in the book, a drop off on the London Underground will also be included. The aim is to reach new readers and remind people that sometimes books can be the best way of discovering
what goes on in your neighbourhood!

This isn’t the first time author and actor Peter Cocks has slipped into character – he stars as Tommy Kelly in the movie-style trailer for the book as well, found at www.undercoverreads.com.

Long Reach is a gritty thriller set in London and Kent and introduces an electric new literary character in undercover teen agent Eddie Savage who girls will lust after and lads will want to be. It is the first title in Walker’s Undercover Campaign.


***
We are incredibly excited to be part of this fantastic giveaway from Walker. We have two copies of Long Reach to give away.

The competition will run FOR ONE DAY only, with the winners announced on Thursday morning before I head off to go and talk to groups of Year 6 students at my local primary school about books, reading and writing.  The competition is for UK entrants only, please.

So, for a bit of fun, to enter, you have to tell MFB and the World what your crime name would be?  Oh, and keep it clean.

I personally would love the be known as Liz "Machete" de Jager or even Liz "Knives" de Jager or something utterly ridiculous.  But in real life I know what I'll be called: Liz "the girl who will read you to death" de Jager.  Feel my pain!
Who wrote this? Liz at 8:44 am

I would be Viv 'Razor Tongue' Dacosta. I have a mean mouth. Mwoaarhaha!

WOW!!! I wish they'd do something like that near me, not only is it very generous but also sounds soooo much fun!

I would be Krazy K, or maybe craft knife K.

tough one. I confess I went and used one of those generators, and it gave me:

which I quite like. In fact, I may start using it ;)

It would probably be Stacey the Dnitch cos I'm rubbish at keeping secrets!

It would probably be Stacey the Snitch cos I'm rubbish at keeping secrets!

Haha I used a generator thing and it gave me:
Puddlecheeks.

I think I prefer something like...zeeb 7. Sounds a bit more scifi than crime tho.

I would keep it simple and be: The Blade.

I think I'd be a pretty mild criminal, someone that loiters in the background looking uncomfortable, maybe something like Fishy Fielding :-)
carolinesfielding(at)gmail(dot)com

My crime name would be Mandy McDagger. Hmm, I quite like that actually!

Yesterday, I saw a pic of a hawk carrying off a bloody lamb so I would be: Hawk!