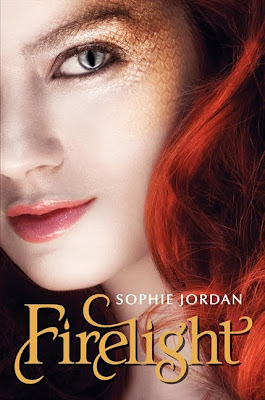 Read essjay's review here. But these below are my thoughts on Firelight.

Firstly, how beautiful if the cover? Yes, we've covered this already, I am fickle.  But it really is.  It's also a very tactile book.  It makes you want to pick it up and touch it.

When we were asked to be part of Sophie's blogtour, we agreed as essjay had read it last year, having bought it in to read via her Kindle.  I did however feel very left out and Liz, the PR guru who works with OUP sent me my own copy to read.

I wasn't quite prepared to like Firelight as much as I had.  I've not read a paranormal YA for some time, having spent a lot of time reading contemporary adult fiction, thrillers and such, so when I had to shift gears to get into Firelight's characters' heads, it happened far easier than I anticipated.

I think it's because I could identify with both of the sisters - with Tamra and Jacinda. I thought that both characters were well developed.  They were both selfish, quite spoilt and far luckier than they ought to be in the situations they found themselves in.  Jacinda, back with the pride, was coveted for her ability to be a fire-breather.  This is quite rare in the world of the draki.  When she manifested her powers they singled her out as something special, something to be held on to at any cost.  Whilst she revelled in the power this gave her, she also must have realised that what made her unique also made her a target.  Tamra on the other hand had to watch her twin sister become everyone's favourite, because of her gifts.  Tamra has none - she is, by all counts 100% human with no draki gifts.  She can't change or breathe fire or breathe under water.  So she was the outsider in the pride.

When their mum decides that she's taking her girls and running away it's not quite clear as to why she's doing this, but it is soon revealed that they want to keep Jacinda as close as possible and away from the pride and their nefarious ways.  The pride would do anything in their power to find Jacinda and keep her tied to them.

Their mum seems to have blocked everything about her own draki - she doesn't want to acknowledge it at all.  And she is keen for Jacinda to lose all contact with her draki.  She moves them to a new home that is in the middle of the desert somewhere and the heat literally drives the draki from her.

Enter Will who sounds wonderfully conflicted and full of angst about his own family.  Will has dark awful secrets of his own and Jacinda reacts very strongly in his presence.  She starts to manifest and they can't seem to stand being apart. She is warned early on about his family and about the fact that no one seems to be good enough for them.  A bit Twilight, yes, but Will's family is probably far more volatile than the any of the vamps in Twilight.

I liked Firelight - I loved the dragonlore and felt on several occasions that I'd like to slap both Jacinda and Tamra for being selfish, self-centred and for being dim.  (This by the way means that Ms. Jordan got it right creating these flawed characters).  I hated how the story ended - it was all wrong.  It was not the right choice for Jacinda to make - I thought she was more intelligent than that.  But to be honest, as much as I hated the ending, I knew exactly why the author had done it: it was the right ending in this instance.  150% the right way to end the book - and yes, it is an obvious hook into the new upcoming follow-up but honestly, I would not have wanted to read it if I felt complacent about Jacinda's fate.  As it stands, I want to know what happens even more.

I think Ms. Jordan has given us something very different here - a very rebellious main character who walks a thin line between like and dislike.  It makes her wholly human as we can see our teenage selves in her.  And we don't like admitting that we are flawed.  I also enjoyed the relationship between her and Will.  It was stop start and although it was a bit instant-attraction, we realise pretty soon why it was instant-attraction, but even so, do not expected the expected.

More please, Ms. Jordan and congrats to OUP for nabbing this very clever debut author.
Who wrote this? Liz at 8:14 am

What a terrific review. Thanks for sharing :D