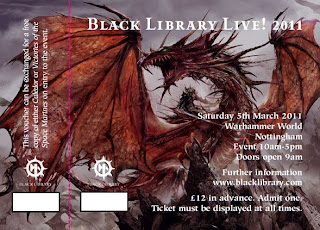 We bought our tickets for Black Library Live at Games Day last year (then lost them, and had to buy another pair), so had been looking forward to the event for what felt like ages.
Then it was here, and we rose to the sound of the alarm In the wee hours of the morning to make sure we missed the worst of the traffic - the M1 is notoriously unpredictable. As it turned out, the roads remained empty and we rolled through the welcoming gates of Warhammer World just after 8 to find.. a few desultory cars and venue quiet and dark. Undeterred, we headed off the McDonalds for a very welcome shot of caffeine. Of course, when we got back a queue was snaking from the door, but that was ok since we were still buoyed by the coffee and mcmuffins. The talk in the queue was largely concerned with which of the new releases to get, particularly the freebie novel that our tickets entitled us to and whether Garro was a latent psyker.
The doors opened, and the queue shuffled forwards in the small reception, where we handed over our tickets, collected our freebies (since the were two of us, we took one of each- result) and collected tickets for the panels in the smaller of the rooms- all the talks were free, but the capacity was limited, so it made sense. The technical bits out of the way, we headed upstairs into the castle-themed gaming hall, where a number of tables waited, laden with copies of new releases, limited edition prints and a smattering of leftover bits from days gone by- buckles, bolter shell pendants and so forth. We pawed through it all, put in a bid in the silent auction for an awesome mounted canvas print of the cover art for Wulfrik (which we sadly didn't win) and walked away with some cool loot.
Then we headed into Bugman's to top our our flagging caffeine levels before the first panel. Bugman's, if you haven't been there, is an Empire-themed pub, resplendent with warhammers, shields and ork heads mounted on the walls, a (fake) fireplace with a Dwarvish anvil and horn and chunky, old world furniture. The prices aren't bad, and nor is the food.. the 'belly buster' burger looks awesome and one day, when I'm short of a few thousand calories, I might give it a go!
The first panel we attended was 'Writing for Black Library' and was led by Christian Dunn, Lindsey Priestley and Laurie Goulding. It was conducted as an informal Q & A, with a variety of questions being fired at the trio, who were happy to field anything raised. For me, the most interesting points raised related to how potential writers need to explore the fantasy or 40K universe/ IP and keep the feel of the setting in their work (a good guideline was that if you can transplant the story to another setting with only a few cosmetic changes, then you've missed something) and to always remember the war in warhammer. A lot of questions were raised regarding the upcoming submissions window, and Christian hinted that Gotrek and Felix short stories would certainly be interesting. Hmm.I have to say that a lot of the questions which were asked could have been answered by reading the FAQ section on the BL website, but it was nonetheless a good discussion and I left feeling a lot more positive about biting the mass-reactive bullet and making a submission.
We had an hour or so to go until our next panel, so made our way up to the Citadel museum and the Art of the Black Library exhibition. It was fairly empty, so it was really nice to take our time and stare at the range of masterfully painted figures without having to worry about being elbowed out of the way. After staring at the mounted Slayer Sword with no little amount of lust it was time to file into the 'Space Marines' panel led by James Swallow and Nick Kyme. 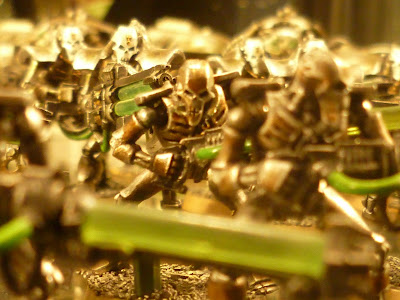 We weren't quite sure what to expect- Space Marines is a pretty broad description and could have covered anything. As it was, it turned out to be a Q & A as well, and while the initial raft of questions touched on the Blood Angels, the key question for me was one about how do you get into the head of a Space Marine's (from a writing viewpoint, I hasten to add), which veered from the authors' preparations (the Gladiator soundtrack, loud!) to musings on the Space Marine psyche and their relationship with humanity in general. There was a very interesting article entitled 'Authoring Astartes' by Gav Thorpe in issue 374 of White Dwarf magazine -ironically with a Blood Angel on the cover- which would've made a good handout for the panel and if it's something you're interested in, I'd recommend getting hold of a copy.
After a pint of fine ale and burgers in the bar we filed into the larger seminar room for the Horus Heresy & Age of Darkness panel, worming our way to the front, as is our habit. Soon enough the stars behind the series made their way onto the battered sofas on the stage - James Swallow, Gav Thorpe, Graham McNeill, Dan Abnett, Aaron Dembski-Bowden (a.k.a ADB) and the new kid on the block, Rob Sanders, with Christian Dunn to as the resident lion tamer. After a largely unnecessary round of introductions, they took it in turns to hint at the current Horus Heresy related works they were working on. In brief:
JS, aside from the second part of the Garro audio drama (which was selling well on the day), is working on Fear to Tread, which tackles the monumental battle of Signus Prime. This was met with many muffled exclamations of delight, which were repeated when he replied to a subsequent question to say that he would be incorporating the story of the 'Red Angel'.


GT is working on Deliverance Lost, continuing the story of Corax from Raven's Flight.
GMc has recently finished The Outcast Dead, which is due out this November and centres on a Terran psyker who learns something which could tip the balance for either side.
DA is finishing Little Horus, which picks up with some of the characters from Horus Rising again and is one which he says will enhance the continuity of the series. He was to have been working on The Unremembered Empire, but that plan apparently got railroaded by an unexpected, secret project…
ADB has two up his sleeve- first, Savage Weapons, in which the Night Lords and the Dark Angels face up against each other and a novella which is an accompaniment to The First Heretic and explores what Lorgar saw in the Eye of Terror.
RS hinted that he was looking at something involving the Alpha Legion.
It's all pretty damn interesting, and it was clear from their responses to the round of questions that followed that they are taking pains to maintain a clear continuity with the series while maintaining the momentum. As they said, there are loads more stories to tell before the siege of Terra but they want to do it properly and don't want anyone thinking they're simply padding the series out to keep the sales up. It was clearly apparent that the guys are loving what they're doing- the camaraderie and 'spark' was there, and I think the series is in safe hands.

Interestingly, the question was put to them as to what their favourite of the series was so far, and the favourite by far was Legion.
The question of whether the story of the lost primarchs was going to be explored was raised, and while Dan noted that it would be, it would never be published. James S did however let slip that they were female..
After cornering a few of the guys for a quick autograph, we made our way back to the car for the drive back to London, both revved up to get working on submissions! It was an absolutely cracking day. It was well organised and everyone -staff, guests, and attendees- was friendly and chilled, there were a variety of cool panel discussions, lots of stuff to peruse. Having a limited number of people there helps as well, creating a far more convivial atmosphere. I know we'll be back next year without a doubt. 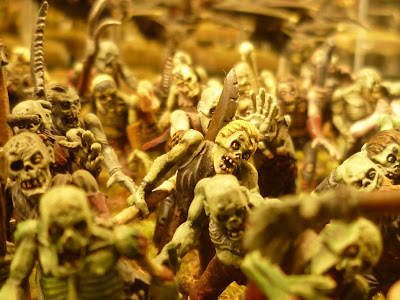 Liz says: This is only my second ever Warhammer event, and my first ever Black Library Live event and although I am very much the newbie, even I could tell the enthusiasm and dedication from the fans, editors and writers about their subjects.  I had an absolutely fab time and became a complete and utter fan-girl and had Mark buy me a dog-tag.  On the one side it has the Ultramarines logo and on the other side it says: Courage and Honour.  I love it.  If I had my way I would have had the bolter gun keyring and the bolter bullet pendant, but maybe next year.  Also, I completely and utterly fell for Bugman's Bar.  Please, can we have one down in London somewhere?

But probably, most importantly, even though Mark has been nagging me for years on end to actually read a 40k novel, I've actually started on one.  And it's not because he's been nagging but because I sat in and listened to the Horus Heresy talk.  I figure that the six authors they had up there, had to be on to something.  So I'm giving Horus Rising a go. I may even review it! 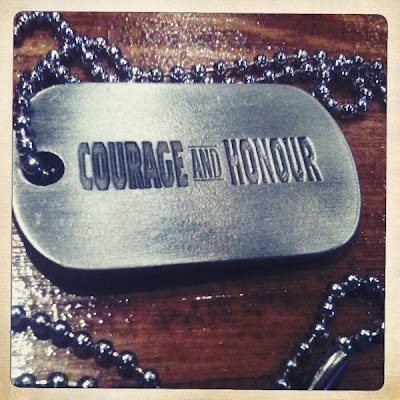 PS: The very excellent Werekin from Liber Malefic (damn them for a cool name) has written up a great blogpost about the BLL2011 event.  Check it out here.
Who wrote this? Mark at 11:00 am

Why have I never heard of Black Librar? This sounds like an amazing event. I can't wait to read your thoughts on the book Liz. Loving the dog tag!

Best of luck with Horus Rising, Liz - I hope you realise what you might be getting yourself into!

Really nice to see you both again. Horus Rising is a great place to start Liz.