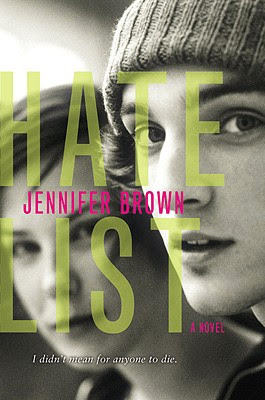 it was just a list. nobody was supposed to die...

Five months ago, Valerie Leftman’s boyfriend, Nick, opened fire on their school cafeteria. Shot trying to stop him, Valerie inadvertently saves the life of a classmate, but is implicated in the shootings because of the list she helped create. A list of people and things they hated. The list her boyfriend used to pick his targets.


Now, after a summer of seclusion, Val is forced to confront her guilt as she returns to school to complete her senior year. Haunted by the memory of the boyfriend she still loves and navigating rocky relationships with her family, former friends and the girl whose life she saved, Val must come to grips with the tragedy that took place and her role in it, in order to make amends and move on with her life.

Every once in a while, a book comes along to shake you out of your apathy. Sherman Alexie's Part Time Indian was a big one for me. Another has been Hate List by Jennifer Brown.

Published in the US some time ago now, Hate List on its surface is about a shooting at an American School.  It must be one of the most horrible things that can happen to any community, but especially to a group of young people, in this instance at Garvin High. What goes on behind the eyes of the killer? What led to this awful act? Who were the victims? And those who survived, how do they survive and go on with their lives, after the fact?

What I loved about Hate List is that Val, our main character, is as confused and torn about everything as everyone else.  She loved Nick, the boy turned killer.  They were good friends as well as boyfriend and girlfriend.  And in any relationship, we like to think that we know our partners.  People look to us for explanation if our husband, boyfriend, lover does something odd or picks a fight with someone.  Exactly the same thing happens here.

People want to know what went so very wrong with Nick that morning when he walked into the Commons and opened fire on various students.  And everyone expects Val to know.  Admittedly, there was the Hate List, that Val started shortly after she came to know Nick.  She wrote down the names of people who annoyed them, slighted them, bullied them.  To Val it was a way to catergorise people in her life.  For Nick, it was clearly something far worse.  It was a genuine Hate List turned into Hit List.

After the attack and during Val's recovery the police questioned her, fully expecting her to fess up that she had something to do with the shooting.  But someone intervenes and explains to the police that in fact, Val was trying to help the victims, she stopped the killings afterall, by tackling Nick.

But honestly, what is done is done and no one is able to see past the fact that Nick and Val were a unit.  Hardly anyone, crucially including her parents, actually believe that she had nothing to do with it.  Take the Hate List for instance - surely anyone who could create something like that was guilty of something.

Val has to face going back to school and all those people in her class as well as the teachers.  She has to put on this incredibly brave front.  She has the semi-support of her mom whom I really came to like.  Wonderfully flawed and fallible, Val's mom really brought the trust issues home to me.  Val's dad just literally disappears in the background (for reasons later revealed) and is a giant ass, basically.  So with this shaky support, Val has to face the scorn, anger and bile from her school mates.  She has one steady rock by her side, that of her psychiatrist, Dr. Hieler.  Charming, genuinely funny and far more clever than Val gives him credit for (initially at least) he manages to get under Val's skin and really shake her into thinking carefully and deeply about everything that transpired.

The story is really, for me, about Val's growth as this tremendous character.  She goes from quiet girl with issues, to victim, to hero, to devastated girlfriend to someone no one is sure of, including herself.  But once she finds herself, her courage, her voice, she's still too much of the Old Val to notice.  And I liked that - I liked that there is indecision, and awfulness and confrontation and not just in verbal confrontation but physical threats and violence, because it parodies real life so much.

This was Jennifer Brown's debut novel.  I am in awe.  The plotting is tightly done.  The characters are wonderfully vivid and felt very real.  Including Nick who we meet in various flash-backs with Val.  We can sort of see what it was that pushed him over the edge, but we are never quite sure because Val is never quite sure.  Nick remains the enigma, but we like him for who is before the shooting.  He is kind, sweet, generous and it looks like he honestly loved Val.   Which makes the shooting even harder to comprehend.

Hate List is a very difficult book to read and not become emotionally involved.  I cried several times - I cried for the awful acts done, I cried because of the lives lost and mostly I cried for Val, having to go through it all.  I cried for the other survivors and for the unfairness of it all.  But I also laughed and felt uplifted towards the end of the book.

The book ends really well - not everything is sunshine and roses, but it ends perfectly for what it is, regardless.  We leave Val and her school friends poised to take steps into their futures.  And who knows what would happen next?

I honestly can say that Hate List blew me away.  Superb writing by a very talented writer who tackled such an awful subject and yet made it about the survivors without bringing sappiness into it.  I'd highly recommend this as one of the best contemporary YA novels I'd ever read.

Find Jennifer Brown's website here.
Who wrote this? Liz at 8:13 am

I was really torn about reading this one due to the subject matter. After that fantastic review I think I am going to have to try it. Thanks

I read this book a few months back but am saving my review for the death and bereavement blogging event that I'm taking part in this sumer. It's such a powerful and emotive book and I applaud Jennifer Brown for what she did with this.