Garro: Legion of One by James Swallow 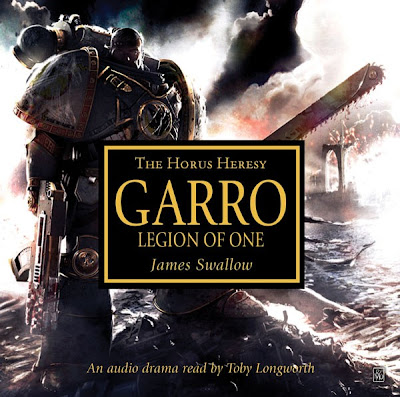 Nathaniel Garro, loyalist Death Guard, and hero of the Eisenstein, has found a new calling in his service to the Emperor. Surrounded by a cloak of secrecy, Garro travels the galaxy in pursuit of his new goal. His quest will lead him to heart of the most destructive warzones, and reveal a secret that will change the course of the Horus Heresy itself...

Legion of One follows on from Oath of Moment, which I reviewed in December, and is released in April. Oath of Moment was brilliant, so when I transferred Legion onto my ipod my excitement was tempered with a note of trepidation. Fortunately, this was one of those too rare occasions where the sequel doesn’t suck.

Legion is set a year after Garro recruited Brother Rubio, and introduces another member of his team, Varen the World Eater, who like Garro had remained loyal in defiance of his erstwhile brethren. But now Malcador’s orders have brought them to a virus bombed shell of a planet, its surface home to nothing but ruined cities and the ghosts of those who called Istvaan III home.

Or so it would seem..

The backdrop of the ruined world evokes some great imagery, and when the revenant known as Cerberus made his appearance it made me grin like a madman.

It’s another strong performance by both James Swallow and Toby Longworth, and one that sets the bar very high indeed for those to follow. James is onto a winner here and I know I’m not alone when I say that the wait for the next instalment is going to feel very long indeed.

You can listen to an extract here.

That really looks great! The cover looks good too. But not sure it's my type of book...