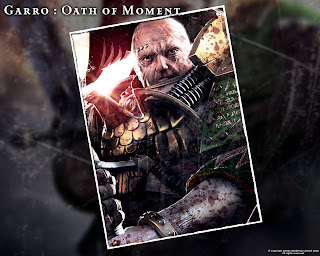 In surviving the horrors on board the Eisenstein, Nathaniel Garro proved his courage and absolute loyalty to the Emperor. On his return to Terra, Garro is despatched on a mission of even greater importance – a mission given to him by Malcador the Sigillite himself. He soon finds himself back amongst the stars and on the fields of battle, thrust into a warzone where the Ultramarines are believed to be battling a greenskin invasion. Once again Garro must fight for survival, but now he also fights to achieve a higher purpose...

Garro: Oath of Moment picks up the story of Nathaniel Garro, the man of the hour of James Swallow’s first Horus Heresy novel “The Flight of the Eisenstein”, and jumps in at the battle for Calth as Imperial forces and the Ultramarines battle the turncoat Word Bearers. It’s here, amongst the death and fire of battle that the grey armoured figure of Garro emerges, implacable and deadly.

How he comes to be there and the crux of his new mission is revealed in a series of smoothly integrated flashback sequences that compliment rather than detract from the pace of the story. Garro reveals his purpose to the warrior he has come to recruit, but finds that the loyalty he holds so dear now threatens his mission as the Word Bearers close in. The action is vividly described, with the sound effects enhancing the experience without competing against Toby Longworth’s narration.

Garro was an engaging, heroic character in Flight of the Eisenstein, and it’s good to have him back again. Grim, deadly and bearing a righteous hatred for the traitor Legions who have followed Horus, he represents everything that’s cool about loyalist Space Marines, and his new mission from Malcador is positively bursting with potential for some great storytelling.

For me, this is by far Toby’s best performance to date, and he brings James’ story to life. I cued it up on my iPod while I was writing this, and I’ve been sitting here doodling Space Marines on my notepad for the last half an hour, listening to it for the 3rd time, unable to stop myself even if I wanted to. If you’re looking to give 40K audio a go, this is what you’re looking for – you don’t need to have read Flight of the Eisenstein, although you’ll have a much better feel for Garro’s character if you have.

The second instalment, Garro: Legion of One, is out next April, which feels like a painfully long time to wait when you all you want to do is find out what happens next!

You can listen to an extract of Oath of Moment here.