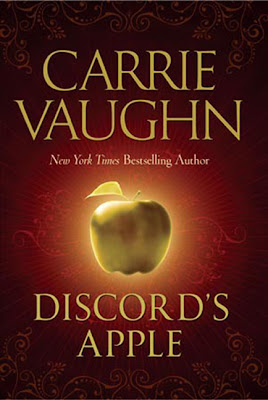 When Evie Walker goes home to spend time with her dying father, she discovers that his creaky old house in Hope's Fort, Colorado is not the only legacy she stands to inherit. Hidden behind the old basement door is a secret and magical storeroom where wondrous treasures from myth and legend are kept safe unit they are needed again. The magic of the storeroom prevents access to any who are not intended to use the items.
Evie must guard the storeroom against ancient and malicious forces, protecting the past and the future even as the present unravels around them. Old heroes and notorious villains alike will rise to fight on her side or to undermine her most desperate gambits. At stake is the fate of the world, and the prevention of nothing less than the apocalypse.

This is such a fantastic concept - when Gav asked me if I'd like a copy, I was nodding so fast, my head almost came off.  But I've savoured it sitting on my shelf and have eventually succumbed to reading it.

We meet Evie as she nears her old home town.  Initially I thought it was modern day world but slowly came to realise that the setting is in fact near-future real world in which America, Russia and China and other nations are lobbing bombs and other nasty things at each other.  There is a lot of unrest on a global scale and the unrest has filtered down to grassroots level now where the local sheriff has roadblocks in the small towns they patrol.  Strangers are eyed with caution and suspicion and you need to carry licences for extra gas (petrol) and it seems that everyone is on edge.  There is talk of ration books and war stamps, Citizen's Watch Groups and checkpoints.  It is not a comfortable world we find ourselves in.

Please read on below the cut as this a long review, with minor spoilers.

Sounds interesting. Will check it out on my Kindle. Just as an aside, there's no "below the cut" here in the post - likely some blog code error somewhere.