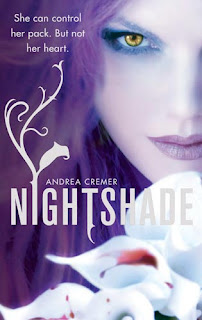 We're very excited here on MFB about the release of Nightshade by Andrea Cremer and to be part of the blog tour. Andrea has been kind enough to write us a brilliant piece about pack etiquette and the mythology behind the book. We hope you enjoy it!
-
In the weeks leading up to Nightshade’s release I’ve been thrilled by the number of reviews and the amount of excitement my book has generated – it’s more than any debut author could ever hope for. A common response to Nightshade from readers is the comment that it’s one of his or her favorite werewolf books. As much as I understand where that idea comes from, I think it’s time for me to take and stand and say Nightshade is not a werewolf book. Here’s what I mean:
I’ve lived long in the realm of paranormal/fantasy proudly bearing my badge of vampire girl. That’s right; I came on board as a fan of vamps, not werewolves. I was Team Edward for all four books of Twilight. I prefer Bill and Eric to Sam in True Blood. But before you start throwing tomatoes, let me tell you why.
Friends who knew I was a vampire girl presumed that meant I love ALL forms of paranormal, so they’d push werewolves at me enthusiastically. I wasn’t interested, and I couldn’t figure out why. After all they were fierce, strong, magical – all things I liked. So what was the problem? And then it hit me – I didn’t like werewolves because I love wolves.
That’s right – I’m a wolf girl, but a real wolf girl. I grew up so far north in Wisconsin that it’s practically Canada. Wolves roamed the forests of my homeland. I also loved National Geographic television specials even more than cartoons. So by age 9 I could rattle off biological and ecological info like a pro. Wolves to me were beautiful, intelligent, social, and graceful.
Werewolves seemed to be none of these things. The werewolves I’d encountered on page and screen were hideous – half man/half beast, usually ugly, often unintelligent, driven only by rage or bloodlust. And worst of all: they didn’t want to be wolves. Lycanthropy occurs as a curse, or a disease. The endgoal of most werewolf tales was to kill the wolf or free the affected person of the wolf curse. I couldn’t come to grips with that idea. If someone asked me – hey wanna turn into a wolf? I’d say “heck, yeah!” Wouldn’t you rather be a wolf? From what I know of wolves, the answer is indisputably YES.
Nightshade’s Guardians are my way of coming to terms with my love of wolves and my trouble with classic werewolf tales. Calla – the alpha female who narrates Nightshade – is powerful and revels in her life as a wolf. Her troubles arise not from her ability to shift, but from the ways in which her masters try to limit her power, to restrain her freedoms. Calla started it all because I wanted to write a story about a female character who wasn’t being pulled into a magical world – she was already in the middle of it, a leader and a warrior. The world of Nightshade came as I tried to figure out how someone like Calla, a girl who I knew was incredibly powerful, could be afraid and angry. What was controlling her? Why would she be fighting against her own destiny? I realized that she was facing off with something even more powerful than herself.
That’s where my background as a historian came in. I teach early modern history (1500-1800) – a period of immense, violent change in human societies. This is the time of witchhunts, religious warfare, colonization, the Inquistion; all types of cataclysmic social transformation that turned the lives across the globe upside down. The more I thought about Calla I thought about the ways in which wolf warriors and witches could have intertwined lives. The mythology in Nightshade is a blend of history and lore, new twists I invented along the way…and wolves in the wilderness the way I always imagined they would be.

Wolves also inspire me because of their sociability.
Pack relationships offered a wonderful way to explore a world of friendship, servitude, loyalty, and betrayal. While Nightshade is about Calla’s journey, it’s also the story of her pack. The other wolves in the book play key roles throughout the trilogy. Wolves offered a wonderful framework around which to explore relationships, love, fear, and rivalry.
I still love vampires, but I have to say I think I’m switching teams. Wolves carry a magic and mystery to me that captured my heart and hasn’t let go. It was just a matter of finding my own way to tell their story.
Who wrote this? Essjay at 6:27 am

This is a great post! I am so glad to hear Andrea on this - I know that Calla is a werewolf, but I always thought that was secondary to the larger issues at hand, ie the hegenomy, the growing issue of free will. Loved Nightshade, and I can't wait for Wolfsbane!