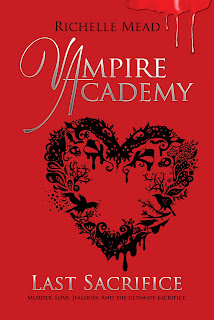 Rose is on trial for high treason and the death of Queen Tatiana. Someone is trying to frame her and it looks like even Dimitri might not be able to save her now.

So, here we are at the close of the Vampire Academy series and Rose is, as usual, in trouble. Luckily for her she's got friends at court and doesn't have to languish in jail for long. A carefully masterminded plan sees Rose, Dimitri and Sydney heading off to West Virginia to hide out. However, Rose isn't a safety kind of girl. She's determined to follow up the note that Ambrose passed to her at her pre-trial and find the person who could unlock Lissa's future. Unfortunately, only Rose thinks this is a good idea and so her struggle begins. I was pleased to see that Rose is taken out of court and away from Lissa to work relatively alone although they soon seem to gather quite an entourage. What with that, Lissa's bond and Adrian's dream walking abilities all the characters are fully involved in this last book.

This is a difficult review to write as I'm keen not to give away much of the plot so as not to spoil it. However, so much happens in this final book that what I will say won't effect the enjoyment. Victor and Robert reappear and their help is invaluable to Rose. They all head off on their mission but Victor and Robert have their own agenda and reasons for trying to help Lissa. Back at court Lissa, Christian, Eddie and Abe try to find out who really did kill Tatiana. To help buy Rose some time Lissa is nominated as one of the possibilities to become the next Moroi queen. The strength of Last Sacrifice is similar to Blood Promise; both Rose and Lissa's plots are equally engrossing. Lissa has to undergo a series of trials which are traditionally set to ensure that she is up to the task of ruling. These tasks really show how far Lissa has come as a character. She's adept and confident now rather than hiding behind Rose or worrying about the effects of spirit.

Meanwhile, Rose's efforts start to get results but her plan also begins to unravel. She's juggling her feelings for Adrian and, of course, for Dimitri. It becomes obvious that she's going to have to choose what's right for her. I really admired the way that Last Sacrifice didn't try to give all characters a happy ending. Like life, there are winners and losers and Mead isn't keen on sending all her characters off into the sunset. There's one in particular that I would love to see carry on in a spin-off series as I'm betting they would have an interesting back story.
I enjoyed Last Sacrifice enormously, it was everything I was hoping it would be. I must admit that in the closing chapters I had tears in my eyes. Rose stays true to herself, I never felt that she was compromising her beliefs or adapting to suit others. Sure, she grows and matures but she remains that impulsive girl that sold the series to me in book one. Lissa also surprised me in this book. She has grown more confident and self-assured but her monarchy trials intrigued me and I found that I looked forward to them as much as Rose's story. The series as a whole has been a pleasure to read. I was slightly daunted when I looked at them all a few weeks ago but each book has zipped by and I found I was glad I had the next book to hand. In terms of a vampire series, Vampire Academy is one of the best I've read. Obviously having a strong female lead is what kept my attention but it also has a fine story arc that holds the series together, strong secondary characters and brilliant world building. I hope that these gorgeous new covers bring new followers to the world of Vampire Academy.