My Soul to Take by Yrsa Sigurdardottir 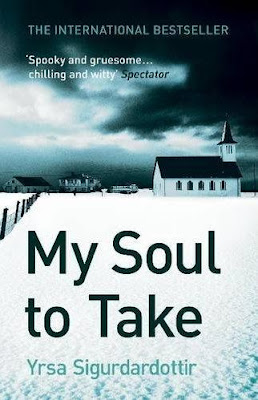 Synopsis
A grisly murder is committed at a health resort situated in a recently renovated farmhouse, which turns out to be notorious for being haunted. Attorney Thora Gudmundsdottir is called upon by the owner of the resort - the prime suspect in the case - to represent him. Her investigations uncover some very disturbing occurrences at the farm decades earlier – things that have never before seen the light of day...
MY SOUL TO TAKE is a chilling, dark and witty crime novel, and a welcome return for Thora, the heroine of the highly-acclaimed LAST RITUALS.
I recently spotted My Soul To Take at Waterstone's and snatched it up as part of a 3 for 2 deal (the other two are all historical crime) as I had the opportunity to read and review Yrsa's first novel, Last Rituals and remember her sense of humour and her tight plotting very well.
MSTT is testimony of a job well done to the author and her translators as I don't think I've read any other translated fiction (apart from Arturo Perez Reverte's books) who really work so well in putting you right there, in the midst of this small desolate Icelandic community.  Don't get me wrong, I like Nesbo and Mankell, but MSTT is something very special indeed.

Thora is asked by a client to come and investigate what he calls a building defect on the farm (now a health spa) and when she questions him, it turns out that he's been seeing a ghost.  But then so has some of his staff at the hotel spa.  He claims that the previous owners purposefully didn't disclose this as they knew he wanted to open a holistic spa and hotel and that those staying there would naturally be sensitive to disturbances such as ghosts.  It could mean his ruin.

It makes a weird kind of sense, so Thora bundles her kids off to her ex-husband and drives out to the hotel.  In the meantime the architect her client had hired to design a new annexe gets killed in a most awful way and it is into this chaos that Thora finds herself.

As Thora struggles to deal with her clients' diva-ish behaviour, she does her best to make sense of what exactly he wants her to do about the ghost but then, when it turns out that a text from her client's phone lured the architect to the beach, suspicion falls on him and she has to bend her considerable personality and knowledge and levelheadedness into figuring out the murder, the mystery about the ghost and the overall mystery of the farm the hotel is situated on, combined with the enigma of the families who lived there in the past.

Add to this Thora's lover from Germany turning up and her kids deciding that they can't stand listening to their dad sing "Eye of the Tiger" one more time, and then taking Thora's caravan and driving off with it.  Bad enough that it's her kids doing it, but they also take her son's pregnant girlfriend with them...

Yrsa Sigurdardottir is an amazingly fresh voice in Icelandic crime.  She writes engaging humourous characters that feel so real.  The element of creepiness is there, and although Thora herself is levelheaded and more likely to laugh at a ghost than believe in it, as the atmosphere of the area and the crimes she uncovers come to the fore, there are several back-shivery moments.

I can't praise My Soul to Take enough - it is darkly funny with off-kilter characters that stay with you long after the book ends.  The translators do a really ace job putting across the feel of the landscape, the awfulness of the two modern day crimes  committed and the lingering unease of the mystery surrounding an awful long ago act by a desperate man as well as the the quirkiness of the characters.

I also think Ms. Siguradardottir's own sense of humour and sense of michief comes to the fore in her writing and it carries over really well into translation. I'd recommend My Soul to Take if you are in a mood for a very well written crime novel with a variety of twist and turns, which is a deeply satisfying read, or, if you're interested in reading her debut, do try Last Rituals and then go out and buy My Soul to Take. You won't be disappointed.
Who wrote this? Liz at 10:35 am

Sounds intriguing and different! I just downloaded the sample chapter to my Kindle.. looking forward to giving it a try.