The Glass Demon by Helen Grant 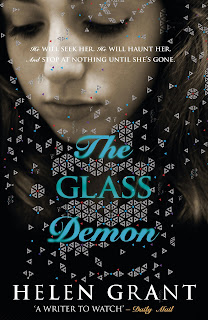 The first death: Seventeen-year-old Lin Fox finds a body in an orchard. As she backs away in horror, she steps on broken glass. The second death: Then blood appears on her doorstep – blood, and broken glass.The third death: Something terrible is found in the cemetery. Shards of broken glass lie by a grave.Who will be next? As the attacks become more sinister, Lin doesn’t know who to trust. She’s getting closer to the truth behind these chilling discoveries, but with each move the danger deepens. Because someone wants Lin gone – and won’t give up until he’s got rid of her and her family. Forever.

In The Glass Demon's opening pages we are confronted with a dead body.  Right. There.  It was weird.  It freaked me out a little.  No, what freaked me out was Lin, Tuesday (her mum) and her dad's reaction to the dead body of the German farmer in his orchard.  They were being very British by walking away from it because they didn't want to be involved - getting involved meant a delay in getting to where they were moving to, it meant questions from the police and to be honest, it would just be really very inconvenient.

Lin is our narrator and we are very quickly appraised of the situation.  Her dad is a well known scholar in medieval history but due to the unfortunate success of his book, (you read that right) he was passed over for promotion at the university.  So in a huff he decides to uproot his entire family and head off to Germany where he can do hands-on research about a series of glass windows created by a master craftsman in medieval times.  But the thing about the windows is that no one quite knows where they are, or if they exist or anything concrete.  They are, as Lin explains to us, an enigma, the holy grail of medieval scholars.  And of course, her dad believes that their discovery would mean fame, fortune, tv-shows and a lot of media attention.

Lin's older sister Polly is the quiet one, the one who does not like confrontation.  She prefers taking care of their baby brother Reuben.  She only has a few weeks with them in Germany before she takes off for a gap year to Italy.  Tuesday is a fashionista diva and together with Oliver (the dad) they form this bizarre bubble of selfish self-absorbededness that really and truly irritated me.  Lin and Polly are in ways far more mature than their parents but it's not done in the way a lot of YA novels are done where the parents are completely off-screen.  Tuesday and Oliver are very much present but they seem to struggle to realise that they have children that need taking care of.  They are so wrapped in their own lives, their own struggles, that when they notice the kids, they don't deal with them as kids, they are treated as miniature adults.  Lin, because she is the only one in the family who can speak German, is asked to translate conversations and she does her best to steer clear of her dad whom she knows would like to lure her into helping him translate some research books.

Lin starts school and strikes up an odd relationship with Michel, who lives on a farm near the ruined castle Lin and her family inhabit.  Michel seems completely star struck by Lin and it becomes clear quite early on that he likes her.  Lin's horrified at this - Michel isn't unattractive but she finds the idea of having a boyfriend a bit much and she does initially try and ward him off.  But various things happen and Michel and Lin grow closer but it's not a comfortable closeness.

There are various incidents that happen to Lin and her family that made me deeply uncomfortable and itchy between the shoulder blades.  The legend of the demon in the glass really freaked me out - especially when we consider how in modern times we are surrounded by glass, unlike in medieval times when it truly was expensive and unique. The author makes tremendous use of suggestion and foreshadowing and setting the ruined castle Lin and her family stay in, in the middle of a darkly mysterious forest, effectively isolating them from the outside world...it just works.

I have to warn you, dear reader, that The Glass Demon is deeply Gothic with characters who are very real - they aren't always likeable and their actions are questionable but they remain true to themselves in their own selfish, self absorbed, damaged human way.

It should also be noted that Polly and Lin's relationship deteriorates as Lin suspects for some time that Polly is hiding something.  When it is revealed that Polly has a eating disorder, Lin is all for telling her rubbish parents but Polly manages to bamboozle Lin into believing lies of things getting better.  I felt here that Lin really should have pushed harder and made her sister see sense.  It really broke my heart, the whole thing with Polly.

One thing about TGD is this sense of impending doom. You cannot get away from it.  You know something bad and awful is going to happen, you just don't know what it's going to be - not even to the very end.  It makes for tense reading.

I didn't have the chance to read Ms. Grant's first novel: The Vanishing of Katharina Linden but I will definitely be doing so in the New Year.  What can I say, I always do things differently.

Find Helen Grant's website here.  The Glass Demon has been out for some time here in the UK through Puffin, so if you're after something to cut through the saccharine sweet of Christmas, this will be right up your street! Just a personal note: it's recommended for slightly older teens - there is some gore, it is not gratuitous but some of the things stayed with me and I'm not a squeamish person at all, so if you are a bit delicate and not too keen on psychological scares, pick this one up knowing that it stays with you long after you've closed the pages.
Who wrote this? Liz at 7:56 am