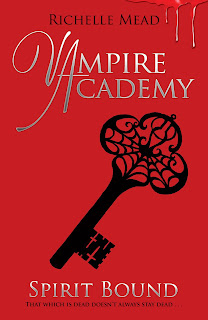 WARNING: SPOILERS!
Synopsis
Dimitri gave Rose the ultimate choice. And she made the wrong one… After a long and heartbreaking journey to Dimitri’s birthplace in Siberia, Rose Hathaway has finally returned to St. Vladimir’s Academy — and to her best friend, Lissa. But Rose’s heart still aches for Dimitri, and she knows he’s out there, somewhere. She failed to kill him when she had the chance. And now her worst fears are about to come true— Dimitri has tasted her blood, and now he is hunting her. Only this time, he won’t rest until Rose joins him… forever.
I enjoyed Blood Promise so much that I wasn't sure if Spirit Bound would match up. The first page throws us straight into the action with a letter from Strigoi stalker Dimitri and Rose's Guardian trials that will see her graduate from St. Vladimir's. Rose is hoping that there may be a chance that she'll be assigned to Lissa but is realistic that after running off to Russia she may not be seen as the most reliable choice. The trials are as exciting as any, "real," fight that Rose gets into but her graduation marks the beginning of a difficult time for her.
Rose, Lissa and co head for court but it isn't long before Rose wants to try and break Victor out from jail as he may have the key to how to cure a Strigoi and bring them back to life. Rose manages to convince others to come along on her crazy plan but it soon gets out of hand. Eventually they end up in Las Vegas but the plan didn't quite go as expected. Adrian is dismayed to learn what Rose is trying to achieve and I must admit I really felt for him in this book. Rose believes that she's trying to move past her love for Dimitri but the very fact that she's attempting to find a way to bring him back says otherwise. Poor Adrian helps because he loves her and in fact even Adrian's mother, Daniella, is supportive of their relationship. Throughout Spirit Bound Rose strings him along somewhat by keeping secrets and standing him up. Rose always has a good reason or strong belief that she's doing the right thing by him and this just about prevented me from getting angry with her but still - poor guy!
Alongside everything, Moroi politics continue to be messy. The constant threat to the Moroi race means that people want action and are arguing between protecting themselves or getting more Guardians to do the job. Rose, either physically or through her bond with Lissa, has good insight into what's going on and this helps her relationship with Queen Tatiana become more heated. This conflict results in some tense scenes including one where Rose is brought in front of the council to give evidence that has far-reaching results. Meanwhile Lissa is checking out Lehigh college and is confronted by Dimitri and his gang. I'm not going to spoil this for you but needless to say this turns the book on its head.
I had a set idea how things would go from this point onwards but I was completely wrong. Politics and personal feelings get mixed up into a whirlwind and the pace is extraordinary until the end of the book. Ultimately, I did prefer Blood Promise although Spirit Bound is an excellent book. I think I enjoy Rose out on her own, away from Court and school as she's a wild character and neither of those places seem to suit her. She could settle in court but I don't feel that, at the end of this book, she's ready. Rose is an endearing and flawed heroine who's matured greatly in the last two books but I'm pleased to say still has her rebellious streak. As many questions were posed as settled and there are a myriad of threads to tie off in Last Sacrifice - so many in fact that I wonder how Richelle Mead will manage it.
Who wrote this? Essjay at 7:05 am