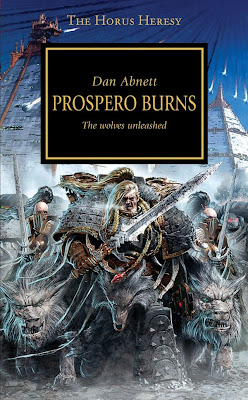 The Emperor is enraged. Primarch Magnus the Red, of the Thousand Sons Legion, has made a catastrophic mistake and endangered the safety of Terra. With no other choice, the Emperor charges Leman Russ, Primarch of the Space Wolves, with the apprehension of his brother from the Thousand Sons’ home world of Prospero. This planet of sorcerers will not be easy to overcome, but Russ and his Space Wolves are not easily deterred. With wrath in his heart, Russ is determined to bring Magnus to justice and the events that decide the fate of Prospero are set in motion.

In this, the companion piece to Graham McNeill’s A Thousand Sons, Dan Abnett looks to the story of the Space Wolves and their path to the destruction of Prospero.

PB opens with an intriguing chapter told from the perspective of Fith, a tribal warrior, as a neighbouring tribe invades their land with murder in their hearts, seeking to kill the bad omen that Fith’s people are sheltering. It’s written in an unusual but very engaging style that hearkens to the old oral storytelling styles, and as such cleverly presages the story to come.

The bad omen, as it turns out, is Hawser/ Ahmad Ibn Rustah, a remembrancer whose stricken ship was interpreted as the foul omen. His fortunes change though, and he wakes in the Fang, the mountain-fortress of the Vlka Fenryka- the Space Wolves- surrounded by the grim, brooding killers that comprise Russ’s Legion. There he discovers exactly how much the path of his life has changed, and begins to learn the ways of the Wolves in his new role as skjald to the Third Company. It’s a role that affords him unprecedented access to the Wolves as an outsider, including the rare and terrifying privilege of accompanying them into battle.

It’s a story of several parts, held together by the thread of Hawser’s past, facets of which are slowly pieced together to reveal a deeply embedded secret, the truth of which will resonate all the way to the ruin of Prospero.

It’s an unexpected approach, but it’s also a clever one- with Hawser seeing things from the point of view of an outsider, Dan’s able to put across facets of life amongst the Wolves that perhaps would not have been considered significant or as telling if the main character had been a Wolf. It’s these, the smaller things, and the philosophy behind them that builds the atmosphere and lets Dan paint a bold picture of the Wolves at the time of the Heresy, without watering down their mystique or their trademark ferocity. It’s subtly done, fast and well executed, particularly given that the main character isn’t a Space Marine as you may have expected.

Most importantly, it was definitely worth the wait!