Company of Liars by Karen Maitland 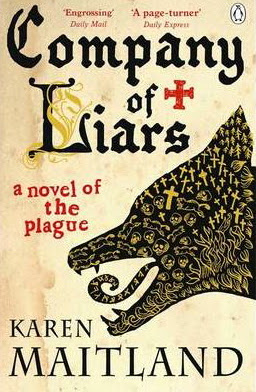 1348.  Plague has come to England.  And the lies you tell will be the death of you.  A scarred trader in holy relics.  A conjuror.  A musician and his apprentice.  A one-armed storyteller.  A young couple on the run.  A midwife.  And a rune-reading girl.


A group of misfits bands together to escape the plague.  But in their midst lurks a curse darker and more malign than the pestilence they flee.

I've seen Company of Liars around for a while now and I eventually succumbed to buying it in desperation - I wanted something different to read.  Something historical with little or no romance in it.  Something dark and gritty.  I thought this would be it.  And I was right.

The novel opens with a group of unknown people in an inn/pub discussing how best to kill a witch.  The conversation goes backwards and forwards and there is this underlying sense of awful menace that it's real, it's something they're definitely going to do. But we leave them behind for the opening chapter in which we meet the character who will be the narrator of Company of Liars.

We know very little about him.  We never learn his name, we only know him as Camelot, which is not actual name as we know it, but more a name for someone who is a peddler or hawker of goods that were not always genuine or thieved from somewhere else.  We know his face is badly scarred from a battle long ago and he's lost an eye because of it.  But he is our narrator and such he is our guide to this era and to those he meets along the way, who ultimately come to form the Company.

Camelot forms an easy friendship with the Italian musician Rodrigo and his handsome apprentice Jofre after he helps them find lodgings at an inn. He learns that Rodrigo and Jofre have been let go from the household of a noble lord and that they are keen to find somewhere to over-winter.  Camelot is hesitant to do so, but eventually agrees to have Rodrigo and Jofre accompany him for a while.  He soon realises that they are very much unprepared for spending time on the road.  Next to join the company is Zophiel, a thoroughly nasty piece of work.  He is the conjuror.  He is single minded and selfish, suspicious of everyone else, rude and antagonistic.  He is also a huge bully and seems to dislike women and anyone who does not conform to what he sees as right. Zophiel's joining of the loose company is not so much a joining for friendship as it for convenience sake.  He has a wagon and a horse and with the help of Rodrigo, Camelot and Jofre, they manage to keep the wagon on the road and the horse fed and in a straight line along the treacherous paths.  Shortly after Zophiel the lovers join the company, Adele and Osmond.  Adele is far gone with child and she is weak, undernourished and of delicate constitution.  Osmond is handsome, brave, thoughtful and caring of his young bride.  They discover that he is a painter and is good with making things, such as wooden toys.  Next to join the company is Pleasance, a mid-wife and a woman of even temper and caring nature.  With her is a young girl called Narigorm, the rune-reader.  Camelot meets Narigorm very early in the book, in the first chapter, before he even meets Rodrigo and Jofre and the child is too eerie for words.  She freaks him out a bit and he's none too pleased when she turns up again.   The final person to join the Company is Cygnus, the one-armed storyteller.

It's a pretty mixed bunch of people - a lot of rivalries and arguments take place as they try to outrun the plague.  They travel north, then east, then north again for a while, stopping off at various villages and towns to trade goods or buy food and supplies.

I had the impression that Ms. Maitland had a blast stripping away the "handsome clean peasants" image we tend to carry of medieval life thanks to movies and tv-shows.  Here we are knee deep in the mud and mire with the characters.  They are cold and wet for say 98% of the book as the weather during this time was dire - there was no summer to speak of and the plague spread fast in the wet unpleasant weather.  Everyone hoped that the cold of winter would stop the plague, that was the big gamble most people took.  The crops died in the fields, entire villages were decimated by sickness and those fields who did survive to bear crops were left to wither / grow mouldy and die.

But, having said that, the focus of the novel is not the plague but the characters and their respective stories.  It is a story with many other stories contained within.  Some of the stories are bleak and unpleasant but for instance Adele's story was wonderful and heartwarming and sweet even if it was full of heartache.  The stories represent the characters they belong to and it must have taken the author ages to get these to fit the cast so well.

There is a twist in the tale - of course there is! - but it is done so well that if you're not paying attention really closely, the twist comes as a pretty big surprise.  But it is the last page that is the kicker and your insides clutch and you go: oh crap, no!

Someone asked me to categorise Company of Liars into a genre.  I can't do that - it is a literary historical with elements of crime (more than a bit) and a bit of fantasy (the stories within stories).  But even more important than this is that it is a fantastic read and one I unreservedly recommend to readers who are in the mood for darker grittier historical fiction.

Find Karen Maitland's website here.  She has another book out at present: The Owl Killers.  I'll be looking to buy that to read too as I think I've just come over all fan-girly!
Who wrote this? Liz at 8:06 am

I did a series of creative writing workshops with Karen Maitland when I was about thirteen. She was absolutely inspiring - she really taught me that it was okay to look at the world from a twisted, sideways perspective. I'm so glad to see her books getting the attention they deserve.