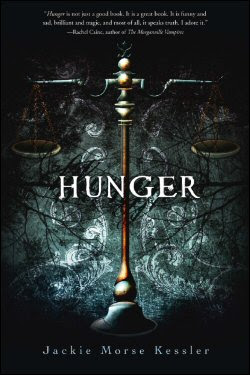 Lisabeth Lewis has a black steed, a set of scales, and a new job: she’s been appointed Famine. How will an anorexic seventeen-year-old girl from the suburbs fare as one of the Four Horsemen of the Apocalypse?

Traveling the world on her steed gives Lisa freedom from her troubles at home: her constant battle with hunger, and her struggle to hide it from the people who care about her. But being Famine forces her to go places where hunger is a painful part of everyday life, and to face the horrifying effects of her phenomenal power. Can Lisa find a way to harness that power — and the courage to battle her own inner demons?

I know Jackie Kessler through some her adult novels she's worked on in the past with writing partner Caitlin Kittredge. I loved these (superhero novels!) and so when I got the opportunity to read Hunger, Jackie's forray into the YA market, I jumped at the chance.

Let's be clear from the start: Hunger is a slender volume. I was hesitant. Could I be entertained enough by something this slim? Within a few pages of reading Hunger, I had no doubt that it would hold my attention and give me something to think about, long after I had finsihed reading it.

We meet Lisa at one of the lowest points we can meet anyone - on the night of her attempted suicide. Death steps in to intervene, offering her the role of Famine, one of the four riders of the Apocalypse. Needless to say Lisa is a bit unsure about this deal. Does she take the deal and become one of Death's Riders or if she turns it down, he'll let her be and she dies. Does she actually want to die? And what would it entail becoming a rider and really, is this real or is she just halucinating quite badly?

Lisa decides to take the deal. She accepts the scales and the black horse that comes as part of her new Office. But then what?

As we learn more about Lisa we see why Death (who looks surprisingly like Kurt Cobain) chose her. Lisa suffers from anorexia. In order for her to be Famine, Death expects her to fully understand the complexities of being hungry. That doesn't just mean only physical hunger either. Lisa's in a tough place personally with anorexia being an outward manifestation of how deeply unhappy she is at home. Her mum is overly busy with a variety of charities and organisations, leaving her father in charge at home. He in turn is lovely, but a bit of a control freak. She turns her back on her best friend who confronts her about her anorexia and instead decides to become friends with a girl who suffers from bulemia.

I felt deeply uncomfortable about the idea of a main character suffering from something such as anorexia and wondered how I would be able to identify with her. It is testimony to Ms. Kessler's writing that my concerns were completely brushed aside and Lisa's ordeal became my ordeal, as did her successes.

Lisa is a wonderfully complex and interesting character. This is as much a coming of age story as it is a story about battling your inner demons and anorexia. It is overcoming the voice in your head urging you to do nasty things to yourself and it is about friendship and family. It is also about growing up and standing up for yourself and the things that you believe in. It is also facing down the things you hate and fear the most.

Lisa's journey is one that had me welling up more than once. Also, it almost had me being sick on a train. The scene where she realises the destructive relationship her so-called friend has with food and the intense description of her friend gorging and then bringing up the food - it was nasty. I came close to needing a little brown bag on the train. However, it is this scene that is so pivotal in the book where things go "ping" in Lisa's head and she realises a great many things and truths about herself on a personal level as well as the embodiment of Famine. Especially when Lisa realises her own worth and that of Famine's, and she decides to stand up for herself not only against War but also against the Thin Voice in her head. Utterly epic. I loved it.

I enjoyed Hunger. I thought it was a deeply moving and thoughtprovoking novel, one that was more than it's parts. It had a magical realism quality to it which I could not fault. It would have been very easy for the author to tumble this book into a narrow ravine of misery but it's not Jackie's style. Helped along by Death's dry and laconic sense of humour and Lisa's own stumblings as a novice Famine, Hunger manages to be clever, funny, poignant, uplifting and life-affirming whilst also being a serious commentary on eating disorders, focussing here on anorexia, something that the author had to deal with as a younger person.

Do pop by Jackie's website where there are some interviews with Death. Also read my friends The Booksmugglers' site for a further review of Hunger and Jackie's interview with Death. Hunger is out now and should be available via Amazon.

I really enjoyed this book - it was interesting to be able to see inside the head of someone struggling with an eating disorder, and not in the touched-up, glossy way that is normally portrayed in books.