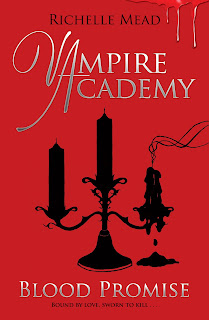 WARNING! SPOILERS!
Synopsis
How far will Rose go to keep a promise?

The recent Strigoi attack at St. Vladimir's Academy was the deadliest ever in the school's history, claiming the lives of many. Even worse, the Strigoi took some of their victims with them - including Dimitri. He'd rather die than be one of them, and now Rose must abandon her best friend, Lissa-the one she has sworn to protect no matter what-and keep the promise Dimitri begged her to make long ago.

But with everything at stake, how can she possibly destroy the person she loves most?
This is my favourite book of the series so far. There's so much to love! Rose has left Lissa and St. Vladamir's to fulfill her promise to Dimitri - not to let him wander the earth as a Strigoi. However, it's one thing to make the decision to walk away from Lissa and everything she's worked for to graduate as a Guardian but another to track down a single Strigoi. She heads straight for Russia guessing that he would head for the familiar ground of his home town. Her first problem is to work out where that town might be so she hangs around nightspots in St. Petersburg trying to locate the local Moroi population hoping that she can find information on Dhampir towns in Siberia.
Alongside her search she also finds herself killing the odd Strigoi and we meet Sydney, an Alchemist (an ancient profession of humans who keep Morois and Dhampirs secret from humans hence protecting them) who's not too happy at the body count she's had to clean up. I loved Sydney for the very fact that she's not overly pleased at having to deal with Rose, Moroi or Dhampir in general. She treats Rose like an annoying wrinkle in her day so is more than unhappy that she has to accompany her to see Dimitri's family. I adored watching Rose discovering more and more of Russia. Although she's dealing with incredible grief she's still got the same spirit and drive. Her conversations with new character Abe are hysterical. Despite the fact that he appears to be an important villain in Dimitri's home town she insists on calling him, "old man," and refuses to be bullied. When Rose finally meets up with Dimitri it couldn't be more exciting. I couldn't imagine what he was going to be like; he was part familiar and part complete stranger but he hadn't forgotten his attraction for Rose. I liked that Meads makes Dimitri a committed Strigoi and not a tortured soul. He has no problems being heartless and ruthless - all the more exciting in terms of storyline.
Alongside the action in Russia we have the bond to enable us to check up on Lissa and the gang. Adrian frequently arrives in Rose's dreams to check up on her although she refuses to give away her location. Lissa has her own set of problems and these were as exciting a read as Rose's story. A new head has arrived at St. Vladimir and with him he's brought his son and daughter, Reed and Avery. Lissa gradually becomes more unstable and unpredictable putting a strain on her relationship with Christian. But is her behaviour to do with her use of spirit and its debilitating side effects? I was engrossed with Lissa in Blood Promise. In fact, I think both Lissa and Rose, as characters, benefited from being apart. I found, "acting out," Lissa more fascinating to begin with than the one who always does the right thing.
There's so much to get your teeth in with Blood Promise. I'm bubbling over to tell you how great the fight scenes are involving Rose and Dimitri. There's even more mythology to enjoy including a meeting between Rose and another shadow kissed couple. Their meeting will have repercussions well beyond this book and I got an inkling of what might happen in Spirit Bound. Honestly, I'm not sure how the rest of the series will top this book. It's pure satisfaction from beginning to end.
Who wrote this? Essjay at 7:01 am