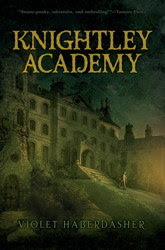 Henry Grim has never been in trouble for borrowing a priceless sword. He has never discovered a forbidden room in a sinister castle or received a death threat over breakfast.

All Henry knows is life as an orphaned servant boy at the Midsummer School, bullied by the privileged sons of aristocracy–until he becomes the first commoner accepted at the prestigious Knightley Academy, where he will train as a modern-day knight alongside the brightest and most arrogant fourteen-year-olds in the country.

It soon becomes apparent that Henry and his two roommates, also from decidedly un-Knightley backgrounds, are not welcome at the Academy, and that someone will go to great lengths to sabotage their chances at becoming knights. But Henry discovers that much more is at stake than his future at Knightley—a war is brewing, and only he can sound the alarm. But is anyone going to believe a former servant on the brink of expulsion?


I thought I'd start by addressing the elephant in the room and talk about Harry Potter. Yes, there are similarities; orphan Henry accepted into elite school, finds friends etc etc. However, the author herself is quite open that she's a HP fan and these points aside, Knightley Academy can stand on its own two feet. It's easy to sympathise with poor servant Henry who's been secretly studying at night and is now fluent in French and adept at Latin. He manages to ignore the cruel taunts of the awful Valmont and friends to sit his exam. By this point I was drawn into the story. The writing is snappy and the dialogue flows - I was already wishing awful ends for Valmont and willing Henry on.

Henry has great supporting characters from his original tutor, Professor Stratford and examiner Sir Frederick. His friends Alex and Rohan band together through their differences from the other schoolboys: race, religion and class. It becomes evident that someone is set on sabotaging Henry, Alex and Rohan's presence at the school with some fairly underhand efforts. The three of them are befriended by the headmaster's daughter,Frankie and with support beginning to fall away it's left to Henry to unravel the mystery.

The book's set in an alternative Victorian era so there's plenty of cobbled streets and gaslights. This also provides plenty of difficulties for Frankie who is anything but a Victorian lady. Scotland is now Nordland where there seems to be some support for a class-less society with women being generally downtrodden. All this gave the book some extra layers and I was quite happy to read it in one sitting, eager to find out how it all ended. I failed at guessing the ending and had completely the wrong baddie!

Author Violet Haberdasher is actually Robyn Schneider who has spent a fair bit of time in the UK. This is all to the good as it shows in the writing; London through Robyn's eyes has a kind of shabby glamour which is how I tend to see it. All in all, Knightley Academy is a page-turning, escapist and fun book. It'll be interesting to see how the trilogy develops as Henry gets older and the obvious problems that are brewing manifest themselves. I can't believe that I'm going to use this word but it was a romp - there, I've said it.
Who wrote this? Essjay at 8:00 am

It sounds intriguing. I'll look out for it.

The HP thing is hard: there were so many of the 'archetype' elements in the books that it can't be easy to avoid similarities. At least your review will reassure readers that it can stand on its own merit.