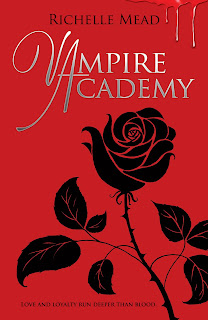 Synopsis
St Vladimir's Academy isn't just any boarding school - hidden away, it's a place where vampires are educated in the ways of magic and half-human teens train to protect them.

Rose Hathaway is a Dhampir, a bodyguard for her best friend Lissa, a Moroi Vampire Princess. They've been on the run, but now they're being dragged back to St Vladimir's where the girls must survive a world of forbidden romances, a ruthless social scene and terrifying night time rituals. But most of all, staying alive.
With the imminent release of the final of the Vampire Academy series, Last Sacrifice, I thought I'd take a look at this series for the first time. I'm not sure how I managed to bypass the whole VA thing but I think you'll agree that these lovely new UK covers will be hard to miss. I much prefer these to the originals, the blood dribbles at the top right corner are a particularly nice touch! So, apart from being embarrassed that these have passed me by I was also a bit daunted when I saw the size of them. The first two are quite slim but the rest, not so much. However, I really want to get them all read in time for the release of Last Sacrifice on the 7th December 2010.
So I sat down with the first one and found that I needn't have worried. The press release describes them as a guilty pleasure and this is certainly true. Rose is a kick-ass heroine: a rebel, fond of the odd tipple, mother issues and not adverse to making out with guys. I loved her from the first page and Richelle has given her a strong voice that carries you with her. In the world of Vampire Academy there are two types of vampire; Moroi ("good" vampires who don't kill) and Strigoi ("bad" vampires who are immortal and kill when they feed). Moroi aren't great fighters and need protecting from the Strigoi who are set to destroy the whole Moroi race. This is where Dhampir's come in who are trained to be Guardians and defend the Moroi from harm.
Rose and her friend Lissa have been found after escaping from their school and going on the run for two years. As the story unfolds we find that the two are bonded and Rose can not only feel Lissa's emotions but can also slip inside her head and see what Lissa sees. This is a great addition to the flow of the story as the only problem with first person perspective is that we're often stuck with one point of view. However, this way we can feel and see what Lissa does which is a very neat solution.
The mystery about why Lissa needed to run is gradually revealed. To be honest the social network at St. Vladimir is pretty terrifying but, daunting as it is, Lissa and Rose used to thrive on the pressure. Rose is able to handle the likes of gloriously bitchy Mia and boys who kiss and tell like Jesse and Ralf. However, there's far more to the mystery than this. Lissa and Rose haven't been back long before a dead fox is left on Lissa's bed. Someone seems determined to send Lissa mad. Lissa starts to doubt herself and has a secret that only Rose knows which they're desperate to keep quiet.
Mystery aside there's also Dimitri, a Guardian who is assigned to help Rose get back up to standard after her two years away. Dimitri is a serious hottie and despite the age difference I found myself willing them together. There's some great will-they-won't-they action going on throughout which is yet another ingredient which adds to the whole guilty pleasure of these books. Honestly though, the first book of any series is almost always exciting. There's world building, characters to get to know and the whole freshness of the story to add to its appeal. I've got high hopes for this series as Rose is a different kind of heroine. She's feisty, punches first and thinks later and makes a million mistakes - not your usual main character. Much to look forward to in Frostbite and I'm interested to see if the page-turning pace continues.
Who wrote this? Essjay at 7:15 am

Great review! This series is fab, I've read the first three and I enjoyed them very much.

I hope you like the rest of the installments in this series as much as the first one.

I started reading this but somehow got distracted with other books halfway through it and never yet returned. It is good to hear you found it a worthwhile read, I think I might need to return to it someday.