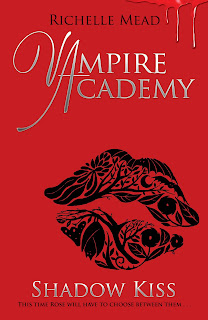 WARNING: SPOILERS!
Synopsis
It's springtime at St. Vladimir's Academy and Rose is close to graduation, but since making her first Strigoi kills, things haven't felt quite right. She's having dark thoughts, behaving erratically, and worst of all . . . might be seeing ghosts.

Consumed by her forbidden love with her tutor Dimitri and protecting her best friend, the Moroi princess Lissa, Rose is in no state to see the deadly threat that will change her entire world - and make her choose between the two people she loves most.
Book three and apologies but I can't review this series now without some spoilers but I promise not to reveal the outcome of each book. Spoilers aside, I was ready for things to change rather than a return to St. Vladimir's but fortunately although they are back at school it's straight into Guardian practical exams for Rose. I wasn't at all surprised that she didn't get partnered with Lissa, however Rose is surprised and extremely peeved to find herself shadowing Christian. An added complication is that Rose has started seeing ghosts and one particular one makes an appearance early on leaving her wondering if she's suffering post traumatic stress from the events of Frostbite.
I'm seriously impressed by Mead's mythology and world building in this book. Previously we learnt about the bond between Rose and Lissa and later discovered that the bond can work both ways. Through Rose's research into the original St. Vladimir and his shadow kissed partner Anna we get to understand more about what that bond really means. It's obvious that the story arc has been planned from book one. I never get the impression that backstory is forced in mid-book to make things work. I'm discovering that this is one of Vampire Academy's strengths and it ensures that whatever the characters do they have an amazing level of structure and plotting behind them.
Back to the story and due to the ghosts Rose is in danger of flunking her practical exam. She's also finding it difficult to control her emotions making teachers worried that she might be suffering from stress after the happenings in Frostbite. There's a fantastically funny scene with a psychiatrist and I loved Rose's true-to-character responses to the questions she's posed. As ever Rose and Dimitri's relationship is a mixture of heartbreak with flashes of hope and love. They make progress, so it's not as frustrating as I worried it may be. Events of Frostbite and the Strigoi's new attack methods return here. Some Moroi are supporting the belief that they should start to learn how to defend themselves. Moroi's have magic and specialise in one of the four elements (except Lissa of course who is a rare spirit user). Christian's specialised in Fire and is eager to use this against the Strigoi. We see more of the politics at work at court regarding this and other matters and I really felt for Rose, Lissa and friends as there's clearly more going on than they understand.
On to the finale (which I'm not going to spoil) and an awesome fight scene. I did see this coming but it didn't ruin the end of the book for me. I found myself flipping pages a million a minute to see if it was true! The ending was perfect (and necessary I feel) and means that everything has to change which, as I've mentioned before, is another strength of this series. Each book could go over the same ground but they remain fresh as characters grow and learn more about themselves. I was most impressed with Rose's realisation that the one thing she thought she wanted was in fact not something she was as prepared for as she thought. I rushed on to the next book and couldn't wait to get lost again in the world that Mead has created.
Who wrote this? Essjay at 7:15 am

I confess to skimming as I havent read these yet.
I just wanted to say how much I love the new red covers. So gorgeous and eye-catching

I love the cover! And the title is very much intriguing itself. My friend even said he's interested in reading the book although he's not a bookworm himself.