Angel by L A Weatherly 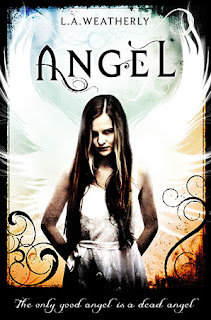 Willow knows she's different from other girls. And not just because she loves tinkering around with cars.


Willow has a gift.  She can look into people's futures, know their dreams, their hopes and regrets, just by touching them.  But she has no idea where she gets this power from.  Until she meets Alex...


Alex is one of the few who knows the truth about angels.  He knows Willow's secret and it is his mission to kill her.  The dark forces within Willow make her dangerous.  But also irresistible.


In spite of himself, Alex finds he is falling in love with his sworn enemy.

I genuinely enjoyed Angel and I know essjay did too.  We gabbed about it for ages and ages after reading it.  What makes Angel stand out so much from other contemporary YA fiction at the moment is not just the sheer storytelling prowess of Ms. Weatherly but her ability to create incredibly believable characters.  For the duration of my reading Angel, I was with Willow and Alex.  They were my bff's and I totally understood them and I completely got Alex's obsession with killing angels.  I was initially less clear on Willow, but that is because initially Willow has no idea what her own story is and it is only as Alex puts pieces together and then reveals it to Willow, that we understand the complexity of their burgeoning friendship.

A further thing which lifts Angel head and shoulders above a lot of other YA is that there is no instant romance.  Alex genuinely dislikes Willow and Willow is terrified of Alex because he's quite blatantly told her that she's evil and should probably be killed.   As matters escalate for them, and they reluctantly have to go on the run together, it is as it Fate really throws them a curve ball.  It is not, I am happy to say, one of those odd relationships we see depicted on TV and in movies.  He's not all alpha and throwing his weight around and then she swoons and falls for him.  It is as their situation goes from pretty crappy to exceedingly crappy, that they come to rely on one another in a very reluctant fashion.  And slowly, almost imperceptibly, their relationship strengthens and they become friends.

I admire Ms. Weatherly as a writer.  I think she has worked so hard on Alex and Willow's characters, making their relationship real, that it is sometimes easy to forget the real threat of the angels hunting them.  This is a minor spoiler but I'm sure you'll see worse on other sites but the angels in Angel are these beings made from energy who feed off humans.  Humans perceive their angelic visitation as something divine, something from God and something truly special.  But in this instance, it is anything but.  Angels feed off humans and by taking their life force, they leave behind savagely ill people who die from cancer and awful diseases.

It doesn't take a genius to realise that obviously Willow has somehow got something to do with these angels and there has to be a reason why they so desperately want her dead. Alex is genuinely a capable hero but we realise that beneath the self-confidence and toughness he is as vulnerable as Willow.  And this shows when it turns out that what he so strongly believes in may not in fact be the whole truth.

The story twists and turns and in some parts it is a road trip book, it is a buddy book and it also a romance.  There were some places where I laughed out loud as the romance is so sweet and so almost cringe worthy in its realness, but don't let this put you off.  It is all so very much in keeping with the writing and the novel that although the romance is an element of the story, it isn't the story.


I highly recommend Angel because it is so unique and well written with strong developed characters and a plot line that makes the Bourne Identity look like a walk in the park. Find the official Angel website here.  Angel is out now and is really a treat to read, so make sure you buy it for yourself or for that teen who is getting a bit fractious wanting something different to read.
Who wrote this? Liz at 8:19 am

I can't wait to get my mitts on this one!