Birth of a Killer by Darren Shan 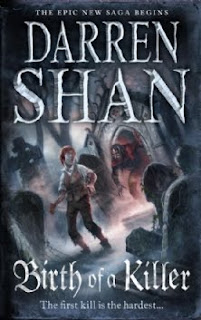 Synopsis
When Larten escapes the terrible workhouse in which he toils, he doesn’t know that he is running from an early death… into another kind of transformation. After meeting the mysterious vampire Seba Nile while sheltering for the night in a crypt, Larten finds himself drawn into the shadowy world of the vampire Clan. As he travels and learns, Larten finds himself enjoying the adventure he has always dreamed of, seeing a world beyond any he suspected in his poverty-stricken youth. But Larten begins to discover something else, too. Much like death, becoming a vampire is something you can’t come back from…
I read and enjoyed Cirque du Freak and was excited to see that Larten Crepsley is the focus of this new series. The Larten we know is world weary and battle scarred but Birth of a Killer shows us the beginning and his journey into vampirism. Larten comes from crushing poverty; he works seven days a week at a silk factory, a place that can only be described as horrific. It's run by an awful foreman who is so evil he once bit the nose off one of his workers. We meet his parents, brothers and sisters and get to understand his humble start in life. A tragic course of events leave Larten with nowhere to go so he hides out in a crypt and is eating cobwebs when he meets up with his future master; Seba Nile.
Although we know that Larten is destined to become a vampire the story of how he got there is full of twists and turns. I loved seeing his experiences in the Cirque du Freak and a fresher younger Larten than the one I was used to. The story about how he happens to have such bright hair is a great one. This is just one of the unexpected aspects of his background that adds so much to the story. We get a great deal of insight into vampire politics too; as Larten's master is an ancient vampire he is more traditional and strict than Larten is later to his own apprentice.
There's plenty of blood and gore to keep horror fans happy but I thought this was a much more grown up book than any of Shan's previous ones. Part of me feels that Larten has endured the worst of life in the opening chapters and that his life improves greatly as soon as he meets Seba. This could be a weakness if it wasn't for the brilliant characterisation by Shan. Larten's struggles, although alien to us, are full of the sort of insecurities than most readers will be able to relate to: girls, socialising, acceptance and rejection. Larten's relationship with Seba is quite touching too as he becomes Larten's surrogate father throughout the years. The story hurtles though time and we see Larten becoming an adult (and a vampire) in this first book although physically he's hardly aged at all.
This new book is full of promise for the rest of the series. I look forward to seeing how Larten copes with the next set of challenges which are heading his way. Also, the complicated vampire hierarchical society will hopefully be more fully explored in the next book. As so many years were covered in this first book I wonder whether the next one will slow down slightly and if so which era of Larten's life will be concentrated upon. Great start to a series with the familiar to allow you to feel as if you've settled down to have a chat with an old friend but enough new material to make it feel fresh.
Who wrote this? Essjay at 8:00 am

I hardly read this books and so your reviews virtually fill me in. They are making me more interested.