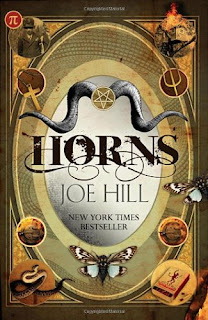 Ignatius Martin Perrish spent the night drunk and doing terrible things. He woke up the next morning with one hell of a hangover, a raging headache... and a pair of horns growing from his temples.
Horns begins as Ig surfaces after one hell of a bender and, bleary eyed, sees the titular horns as he staggers into the toilet. He’s still struggling to decide whether they’re as real as they feel or if it’s a ghost from the night’s excesses when he unwittingly discovers another aspect of whatever it is happened to him – anyone who sees them feels compelled to spill their darkest fears, sins, or desires to him, as if it’s the most natural thing in the world. It’s a reaction that soon drives him away from people, even his family out of the fear of what darkness lies beneath their smiles.

I found Ig to be immediately and immensely likeable, and nothing in the subsequent 400 odd pages changed that first impression, quite the opposite. At the point we meet him, there isn’t much to write home about in Ig’s life. Haunted by the accusations of the brutal murder of his girlfriend, Ig’s been going through the motions, building a tenuous normalcy into his life and not really succeeding. It’s a house of cards though, and swiftly smashed aside by the insidious effect of the horns. As dark secrets and even more unpleasant truths are uncovered Joe takes us back into Ig’s life, teasing the pieces of the puzzle together before taking us back onto the home straight and delivering an ending that’s as poignant and satisfying as it is horrific and bloody.

Horns is populated by well drawn characters, especially Ig and Lee – the insight into the latter’s mind in the build up to the day their fates were sealed is brilliantly done. I was tempted to describe Horns as eccentric, but it’s far too well plotted and realised for that.

It’s a greedy, miss-your-stop kind of read, a journey that takes in the intensity of a first love, the fallibility of God, bitter betrayal, murder, lust and revenge.. and is my favourite book of the year by a country mile. Utterly lovely. Read it.
Who wrote this? Mark at 9:30 am

I hadn't heard of this one before, but it sounds great. I think I might just add this to my ever-growing to-read list!

The cover gives me the impression that this book is about cults. LOL