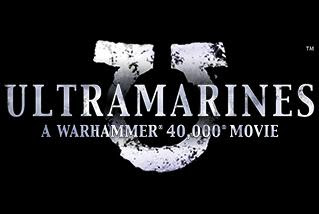 Liz and I were invited to a special preview screening of Ultramarines today; needless to say we didn’t need to be asked twice!

So, wrapped up warm against the bitter chill in the wind, we headed into town along with our friend Amanda of Floor to Ceiling Books who had also been invited long. We got there too early as usual and stopped at Cafe Nero for a very welcome hot chocolate.

We didn’t have to queue for long, which was good given the icy wind trying to squirm under our jackets, and were soon safely ensconced inside the Odeon, gleefully pinning the Ultramarines badges we’d been given onto our lapels. Bob Thompson, the producer, stepped out on stage to introduce the movie and thank both the crew and behind the scenes figures that made the movie possible, but also to thank the fans for, well, being fans. Which I thought was pretty cool. Without further ado, the lights dimmed and the movie began.

Without giving away any spoilers, the movie centres on a squad of Ultramarines, newly promoted to the status of battle-brothers and spoiling to prove themselves and earn glory for themselves and the Chapter. They’re sent to investigate a distress beacon at an Imperial Fist shrine. After landing it soon becomes clear that they’re not alone, and before long it’s all blood and boltguns as we’re reminded in graphic detail that, in the 41st millennium, there is only war.

Ultramarines clocks in at around 75 minutes, but it flies by. The pacing is spot on, as is the interaction between the characters; they’re not clones, and there’s a friendly rivalry between them, and a clear sense of them having their own ambitions. I know that numerous message boards and forums have lots of naysayers carrying on about the quality of the animation and rendering, but having seen the finished product, these concerns are largely unfounded. It’s gorgeous, both in respect of the detailing and the animation – the combat sequences are brutal maelstroms of ripping chainswords, roaring boltguns and broken bodies and are starkly beautiful in their own right. The Ultramarines’ wargear is brilliantly realised, and they’ve clearly given a lot of thought to the practicalities of wearing Astartes power armour and how that would affect the way you move and fight. Sure, there are a couple of shots that could have benefited from a touch up, but these are few and far apart, if you notice them at all.

Ultramarines is a movie for the fans; it does exactly what it says on the tin, and delivers in spades. It’s a great story, told in an atmosphere that’s immediately familiar to anyone who’s ever read 40K material and a treat to watch. No one in the cinema went away disappointed, not even the bikers in the seats opposite me who were baying and cheering for the Black Legion. It’s a must see movie. 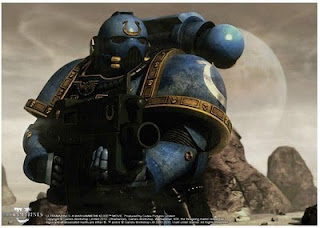 Liz: As someone who has not read the books, can I just say that I completely understood where these guys were coming from. I loved the scale and the spectacle of it – when the guys were all preparing their kit in the armoury, you get to appreciate the sheer size of the ship they are on. When their (by comparison) Thunderhawk jettisons from the ship to head to the planet and the camera pans out – wow, just wow.

I loved the sense of impending disaster as the guys got to the surface. Atmospherically animated with fantastic sound-quality, I found myself straining forward, to peer through the storm they were walking through.

The fight sequences were visceral – again, I thought that the scale of the armour, the weapons and the actual Shrine itself, in which some of the fighting took place, really did depict something vast and dangerous and alien.

I am a massively huge geeky fan of Sean Pertwee and having him voice one of the characters who has a clear character arc, had me grinning from ear to ear. As a complete noob to the world, I instantly identified with these warriors, their squabbles and felt their anger and anguish but also their fear. Mr. Abnett as screen writer has done an amazing job here – it is a solid story line and along with the animators, they’ve given me something that makes me want to pick up my first 40k book to read. And you have to admit, that says a lot.

I cannot wait for our pre-ordered copy to arrive! For the Emperor and Macragge!

You can see the second trailer here.

You guys have just given me hope for the movie again, thanks! Excellent review and I'll definitely be queing for the DVD when it hits SA. :-)