Harry Potter and the Philospher's Stone 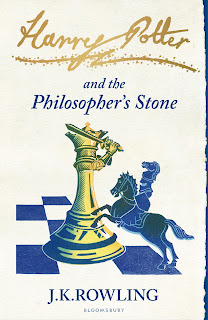 Harry Potter thinks he is an ordinary boy. He lives with his Uncle Vernon, Aunt Petunia and cousin Dudley, who are mean to him and make him sleep in a cupboard under the stairs. (Dudley, however, has two bedrooms, one to sleep in and one for all his toys and games.) Then Harry starts receiving mysterious letters and his life is changed forever. He is whisked away by a beetle-eyed giant of a man and enrolled at Hogwarts School of Witchcraft and Wizardry. The reason: Harry Potter is a wizard!


I read the first 2 books in the Harry Potter series around ten years ago, when we first moved to the UK.  I hardly remember anything about them, but of course, I know all about Harry.  He's become such an iconic character in children's fiction and is the darling of so many kids who grew up with him and who are now all young adults themselves.

I've always been a bit bemused by Harry Potter's success and I'll admit, it really put me off reading the rest of the books. When something gets that big and that scary with that many dedicated fans, it's both a good thing and a bad thing.  I couldn't imagine loving it that much and it made me question my ability as a reader, not even a reviewer! What was I missing?

So, when I spied these gorgeous new covers, I threw caution to the wind and succumbed.  I sat down with Harry Potter and the Philosopher's Stone and read it from cover to cover and was smitten by a small skinny untidy haired boy with glasses and the ability to get into all sorts of trouble.

And I'll admit that although JK Rowling's writing is good, it is not awe inspiring but it is incredibly engaging and she really hits those beats that makes you want to read more and faster in order to find out what's going on. She uses a lot of archetypes in Philosopher's Stone and there are big elements of the fairy tale about it, but honestly, you can say the same thing about Star Wars and that is a perennial classic that just won't lie down and die.

What I loved about Philosopher's Stone is how the three characters of Ron and Hermione came together to form a small band of friends.  There was the initial bickering between then all and also the annoyingness of Hermione being such a goody goody but it works out really well - when Hermione grows up enough to put her friends first and her studies and tutors later, we see her character growing right before our eyes.

Harry's growth is a lot more subtle even though he is by far the main focus of the story. JKR really works quietly in the background and before we know it, Harry has somehow managed to transform from a shy boy, used to being degraded by his adopted family, into a young boy who has such belief in himself and his friends, that he is prepared to take on a variety of monsters to protect them all.

If, like me, you've been cautious about approaching the Harry Potter books, I can't recommend this, the first book enough.  It is far better than a) I remember it being and b) expected it to be.

Philosopher's Stone, really lays the groundwork of Harry, Ron and Hermione's friendship.  Harry learns much about wizzarding, and how completely different things are to what he knew before as a normal human being.  He finds out about his mum and dad and realises how much the Dursley's have kept from him.  But then he also finds a new family, his friends at Hogwarts.  It introduces us to Hogwarts and to Hagrid who I think is every single person's hero.  I mentioned on twitter one dire day at the office that I am now ready for Hagrid to come whisk me away to Hogwarts and had around thirty replies from various friends saying that yes, can Hagrid and I swing by and collect them on the way?

And it also introduces us to the enigma of Voldemort, of course.  I can't help but look forward to reading more because I feel I'd like to know more about what he'd done in the past and why exactly he is such a big enemy.  Obviously I know, because I would have had to be a stone not to, but I want to find it out in JKR's words.  I've not done a reading challenge on MFB before but I think this is definitely a worthy one and one I've enjoyed thus far.  Next up to read is Harry Potter and the Chamber of Secrets. I shall report back anon!
Who wrote this? Liz at 12:18 pm

I read this for the first time about a month or so ago. I had avoided it for largely the same reason you mention: it had just gotten too big. But now that I have read it (and am still working on the rest of the series), I'm seriously enjoying it! The writing is hit or miss, but the stories are engaging.

Very much a guilty pleasure.

I (mostly) love the characters; I actually think of the fairy-tale narrative as a plus; I love the simplicity of the core idea (a wizarding school as an old-fashioned English boarding school). The writing is just strong enough not to detract from all the good stuff. And Rowling's got such a contagious soap-opera passion for her central characters that you can't stop reading them (and re-reading them, in my case).

I had a little bit of an argument with a friend of mine the other day over whether a book could be enjoyable and bad. I loved these books, and have read them several times, but I will cheerfully insist they are terrible. The dialogue is often cliched, the plot-holes are both gargantuan and ubiquitous, she's over-fond of the "Dumbledore plot summary" at the end of every book, and of offensively convenient dei-ex-machina in several of the books, and the wrap-up at the end of Book 7 is one of the most confusing, messy and inconclusive pieces of literature I have ever read.

But I loved them, and will cheerfully recommend them to anyone else.