In the dark of dreams, by Marjorie M Liu 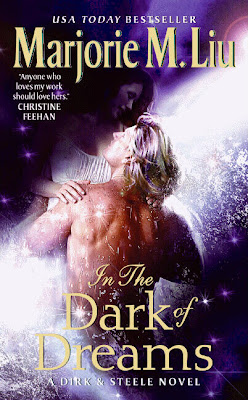 
She was only twelve when she saw the silver boy on the beach, but Jenny has never stopped dreaming about him. Now she is grown, a marine biologist charting her own course in the family business—a corporation that covertly crosses the boundaries of science into realms of the unknown…and the incredible.

And now he has found her again, her silver boy grown into a man: Perrin, powerful and masculine, and so much more than human—leaving Jenny weak with desire and aching for his touch.

But with their reunion comes mortal danger—from malevolent forces who would alter the world to suit their own dark ends. For Perrin and Jenny—and all living creatures— their only hope for preventing the unthinkable lies in a mysterious empire far beneath the sea—and in the power of their dreams.


This is my second ever Marjorie M Liu book and I have to give Ms. Liu credit where it is due: the girl can write.

The opening sequence of a very young Jenny finding a physically hurt young boy on the beach. As she tries to tend to his wounds she can't help but think that there is something very different about him. She can't help but be drawn to him but before they could really spend any time together, the boy is dragged off by a very angry man who appears from the sea itself.

We skip ahead several years. Jenny is now a grown young woman, doing her best to stay away from her family. Using her career as a marine biologist, Jenny travels the world and tries to make sense of that mysterious experience she had so many years ago.

Through various machinations (all of them pretty bad, actually) Jenny and Perrin, the young boy from all that time ago, meet up, only to go on the run together to find out the truth about themselves and the dire situation they find themselves in.

I genuinely enjoyed In the dark of dreams as the mystery of both Jenny and Perrin's past drew me along as well as the enigma of the events taking place in the present. There were some instances where I thought Jenny's reactions to Perrin were pretty extreme and where she delayed too long to react to some set-pieces, especially when it comes to the martial combat pieces, but honestly, these were all down to personal dislikes, rather than anything to do with Ms. Liu's writing.

I find Ms. Liu's writing style genuinely engaging. I love how both books that I've now read of hers manage to be both intimate, with engaging characters, whilst also addressing a bigger theme. I thought that In the dark of dreams there was definitely an eco-message about humanity and our impact on the natural world, here especially the sea, but the message is never crammed down our throats. It is part of the overall story whilst the two characters of Jenny and Perrin are the main focus, as is their cautiously growing relationship. Jenny's character especially has an amazing character arc and I have to say, she really lives up to being the heroine for In the dark of dreams.

This is also the first e-arc / book I've read on my new Kindle for review purposes (fron NetGalley). And it was ace - a great experience on all counts.

Find the author, Marjorie M Liu's website here. In the dark of dreams is out later at the end of this month, from Avon in the States.
Who wrote this? Liz at 9:30 am