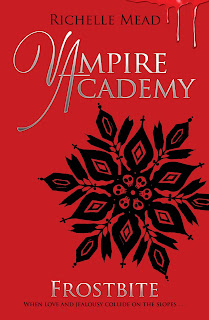 Synopsis
It's winter break at St Vladimir's, and a massive Strigoi vampire attack has put the school on high alert. This year's trip away from the academy to the wintery peaks of Idaho has suddenly become mandatory.

But Rose's troubles seem to follow her wherever she goes - dealing with the pain of knowing that her relationship with her tutor Dimitri can never be, things get even more complicated when one her closest friends admits his feelings for her.

The glittering winter landscape may create the illusion of safety but Rose - and her heart - are in more danger than she ever could have imagined...
Book two of the Vampire Academy series and I was interested to see where this one would go after the excitement of the first book. So, major world building aside would there be enough story line and characterisation to keep me interested? The book begins with Rose and Dimitri driving to an important Guardian's house so she can take one of her essential exams to enable her to graduate from school with the rest of her year. They arrive to carnage and it becomes clear that only a human could have breached the charmed wards on the property to enable a group of Srigoi to slaughter the inhabitants. The enormity of what this means for the Moroi and their safety means that the school's winter break takes place at a ski resort in Idaho whilst the Moroi community decides how to deal with a group of travelling Strigoi.
Rose as a character grows a great deal in this book. After just a brief mention in book one of her legendary Guardian mother Janine Hathaway, I was pleased to see that she appears in person in Frostbite. Both Janine and Rose regard each other with a great deal of skepticism and animosity. In fact Rose is pretty sure that she doesn't have any sort of meaningful relationship with her mother at all. What I love about this series so far is that no miraculous and unbelievable leaps in character development take place. Rose and Janine have a long way to go and manage to take the first few steps (both forwards and backwards) in book two. Likewise, although Rose learns a great deal about herself she's still an, "act first and think later," kind of girl.
I (unforgivably) didn't mention Christian in my last review. He's a Moroi whose parents willingly turned Strigoi which leaves him as persona non grata for the rest of his life. In Vampire Academy he formed an unlikely relationship with Lissa which I found touching. He's snarky and full of resentment but Lissa smooths his corners. In Frostbite they're a proper couple and Rose has to deal with losing the full attention of her best friend. I liked that Rose was both jealous but then angry with herself for resenting Christian - it felt very real. Rose is trying to accept that there can be nothing between herself and the wonderful Dimitri and tries to return the interest that Mason clearly has in her. But then Tasha Ozera, Christian's aunt, turns up for the ski break and makes it quite clear that Dimitri (or Dimka as she calls him) is welcome to become her Guardian with benefits. I gritted my teeth with Rose as she deals with her spiralling resentment and discontent.
Another great character, Adrian Ivashkov, makes his first appearance in Frostbite. He's a rebellious Moroi who relies heavily on alcohol to get him though the day. He takes a fancy to Rose and ensures that Dimitri also feels his own measure of jealously at their friendship. Without spoiling the plot for you he has a reason for his alcohol intake and some interesting skills to share with Rose, Lissa and the gang. He adds a great deal to the plot and benefits from being somewhat older and more independent than the others. By the time the book races to its conclusion Rose has to deal with Mason's and Adrian's feelings and her own for Dimitri.
The conclusion is dramatic and somewhat shocking. Rose is pushed to test her own strength and learn hard lessons about how her actions can affect others. I loved how Frostbite didn't relax into just another school term at St. Vladimir's but sought out new locations which helps keep a fresh feeling. The characters all develop and change and new questions are raised that left me eager to read the next instalment.
Who wrote this? Essjay at 8:30 am

Everyone is talking about VA at the moment.
A year 11 girl has challenged me to read them. After reading your review I dont think it is going to be much of a challenge :D
Thank you

Great review. Thanks. I so can't wait to get hold of this set with the gorgeous red covers!