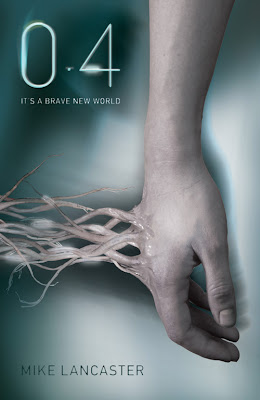 It's a brave new world. 'My name is Kyle Straker. And I don't exist anymore.' So begins the story of Kyle Straker, recorded on to old audio tapes. You might think these tapes are a hoax. But perhaps they contain the history of a past world...If what the tapes say are true, it means that everything we think we know is a lie. And if everything we know is a lie does that mean that we are, too?
0.4 is a rare animal - intelligently written plot driven science fiction for a younger generation who may not know they are reading science fiction. At the start of the book we are introduced to the story by an editor who tell us that the book we are holding in our hands is an old, outdated format of conveying a narrative and the reason why the book has been put together will become apparent as the story unfolds.  There are editorial comments inserted throughout the book, explaining unknown terms such as “reality TV” and notes on research done on the tapes the book is transcribed from.
It’s a very different way to begin a story and I initially thought it was a bit of a gimmick, but as the story went on, I learned differently.
Our main character, Kyle, is just an average kid in an average village somewhere in the UK.  He’s watching his parents desperately trying to save their crumbling marriage, his brother is being an idiot and Kyle, well, Kyle is harboring an infatuation for his best mate, Danny’s girlfriend, Lilly. They once had a “thing” but Kyle managed to screw it up and now he’s the third person to their (un)happy little group of friends.
The big day of the town’s talent show is coming up and Kyle reluctantly agrees to go and watch everyone make idiots of themselves.  He’s cringing inwardly when his mate Danny walks onto the stage to do his new hypnotism show but before he knows it, Kyle finds himself up there on stage, along with Lilly, the postman Mr. Peterson and Mrs. O’Donnell, an ex teacher.
Danny seems to pull off a successful hypnotism act, or so the small group think, when they awake. Things don’t seem right somehow. No one is moving.  There is a peculiar silence in the air.  The village has come to a standstill - no one is moving, no one is talking, there’s just Kyle, Lilly, Mr. Peterson and Mrs. O’Donnell who seem “awake” and Mr. Peterson’s not taking things very well.  He’s curled up in a small bundle, crying, whimpering to himself, refusing to acknowledge anyone.


Kyle, Lilly and Mrs. O'Donnell wander through the town, trying to puzzle what’s going on.  They try emergency services but there is nothing on the other side of the line.  They turn on Mrs. O’Donnell’s Mac and weirdly, there are all these bizarre glyphs scrolling across the screen.  What is going on? As they try and puzzle things out, they notice that people have started moving away from the Green, towards their homes.  There is no talking, no real communication, but everyone is moving.  Which is far better than when they were all just motionless.
When Kyle confronts his own family he realises that life as he knew it has changed and maybe he’s not that safe as he would like to think.  He makes a run for it, finds Lilly, Mrs. O’Donnell and Mr. Peterson and together they set off to find the how/what/why/etc.
As things develop we only know and find out as much as Kyle and the group find out and it is this limited point of view that really serves to give us a distanced perspective and it because of the distance that the creep factor is dialed up nine.
Just scroll up and look at that picture on the cover again.  Creepy.  Euch.  And it becomes quite clear why it was chosen as we rush headlong towards the ending.
The whole concept is not a very new one, I’ll be honest.  If you’re a movie fan and have read various science fiction titles, you’ll quickly suss out what the book is about.  But, and it’s a big but, here, Mike Lancaster writes 0.4 just so well that you don’t really mind that the concept isn’t as new and as fresh as it could have been.  He spins a great yarn and the fact that the story isn’t dumbed down or held back by unnecessary secondary plotlines makes this a great read.  I read it twice, in fact, and loved it even more the second time around. And it’s creepy and eerie as all hell.  Especially in this day in age where we are all so very reliant on our mobiles and computers and the internet. It made me very uncomfortable and it made me think that maybe, maybe those glimpses of something from the corner of my eye were not just shadows…
Find Mike Lancaster’s site here. This is the site dedicated to Kyle Straker.
PS: If you've liked this, why not try John Cristopher's "The Death of Grass" and "Midwich Cuckoos" by John Wyndham.
Who wrote this? Liz at 8:03 am

I really love the sound of this one and can't wait to read it. Great review :)

OMG - I have to have this book!

Whoa. This book sounds really really interesting (and the cover really draws you in too!)

Thanks for the heads up about this one :)

thanks for the great and honest review. I am looking forward to this one myself.

I've seen a couple of indifferent reviews of this one, but also a few like yours that really liked it.

I think that it is one I'd really like to read, however.

As I read your review I was thinking about "The Midwitch Cuckoos" which I loved and then I saw your comment at the bottom.

I really like the sound of this book - must hunt it out. Great review.