The Lost Relic by Scott Mariani 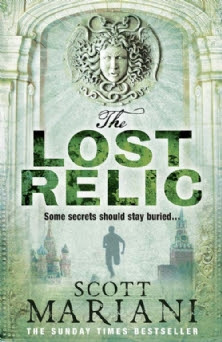 Some secrets should stay buried…

Whilst visiting a former SAS comrade in Italy, a distracted Ben nearly runs over a young boy – and unwittingly walks into his deadliest mission yet.

Ben’s involvement with the boy’s family runs deeper as he witnesses their brutal murder at a gallery robbery. A seemingly worthless Goya sketch was the principal target in the bloodbath heist. Now it’s up to Ben to find out the truth behind the elusive painting.

Wrongly accused of murder and forced to go on the run,he must get to the heart of the conspiracy while he still has the chance. . .

Scott Mariani’s newest offering The Lost Relic has to be his best so far. Having read all of his novels (loved them all) from the day they were released, I have become a fan of the writer but also a big fan of the main character in all the books.

In this, Ben’s sixth outing, a visit to a friend in Italy turns into a nightmare. Deciding to take the scenic route back to Rome where he is due to fly off to London to meet up with his girlfriend Brooke, Ben narrowly misses a young boy chasing a cat across a dusty road.

When Ben walks the little boy back home, it transpires that the boy is the son of one of the guests at an exclusive gallery. Ben, being the kind of guy that he is, charms the little boy’s mother and she invites him to join everyone at the gallery for a showing of some rare pieces of art. They chat amicably and Ben relaxes a bit, enjoying her company and the art around them. That is until another guest accidentally bumps into Ben and spills his drink. Ben heads upstairs to clean it off when he hears some gunshots from below. Being Ben he quickly susses out what’s going on and becomes involved in one of the ugliest one-to-one scenarios I’ve read in ages. He takes out several of the attackers through intelligent planning and really doesn’t mess around when it comes to incapacitating them. I approved.

The sequence reminded me of Die Hard a little bit, but I suppose it will be difficult writing anything like this and not have it be a bit of a homage to the flick. However, back to Ben. The action moves swiftly on from here with several fist-punching moments but also a moment of deep emotion and I found myself hunched over the book, holding my breath. It’s tense, probably one of the most tense from Mariani yet.

After some time, Ben finds himself in Rome, facing the consequences of the attack on the gallery. Everyone sees him as the hero of the gallery when in fact all he can think about are those he did not manage to save. The thing about Ben is he’s not really a glass half full, kind of guy. He is inclined to deeper, darker, more negative thoughts and it is really well portrayed within this section. We completely understand where he’s coming from, the choices he’s been making and the direction he does decide to take in the end.

When external forces intervene and decide to turn Ben into a scapegoat for a crime he did not commit, Ben has the opportunity to dig deep and hard to figure out what exactly the attack on the gallery was really about. And like Bourne, even on the run, he manages to piece things together, whilst successfully evading capture.

Ben is still a darker hero than normal but we know his reasons. We see where he makes his mistakes and we want him to succeed and come out on top. I’d say out of all the books thus far, this is the most action packed yet, and although it is grim, I felt at times that it was a less dark novel than some of the other Ben Hope books I’ve read.

The story rockets along at a great pace with enough pauses for the reader to catch their breath. The plot is tight and only twisty. Mariani’s voice has grown stronger and more adept and as Ben’s puppetmaster he excels at giving the reader what they want: an intelligent fast paced thriller to rank up there with the best of them.

Also, a word to those who have not yet read Scott Mariani’s Ben Hope books. You don’t have to start at the beginning. You pick up exactly who Ben is and where he comes from in The Lost Relic - the backstory is there, it’s done well and exposition is kept to a minimum, which really is a quality that Mariani excels in. Each story is pretty much standalone with some strands carried over to the next.  But a warning: they are ridiculously addictive reading.

And finally, I know that Mr. Mariani is going to hate me for saying this but honestly, I cannot wait for the next Ben Hope adventure. Most of the plot strands within The Lost Relic gets tied up, save for developing the more personal relationship story with his girlfriend Brooke. *waits impatiently*

Find Scott Mariani's website here.  The Lost Relic is out now.
Who wrote this? Liz at 8:36 am

I haven't heard of Scott Mariani but I have a sneaky suspicion that I may be missing out on something.

Really loved the latest installment in the Ben Hope series. The ending was good but I felt Scott didn't do justice with Brooke and Ben's relationship story line. Perhaps he will built on it in the next Ben Hope book? (and I really hope the series continues).

Scott Mariani is a great writer! After reading all Lee Child's books I found Mariani and I think he is better. Hard to put down once you start reading! I am currently reading The Lost Relic.