The Summoning by E E Richardson 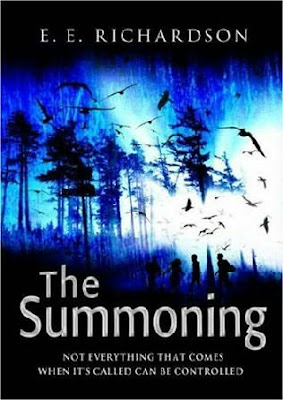 Justin hasn't ever really believed in the occult, even though his Grandpa, Blake is an expert in it and has a house full of curious objects and old tattered books on magic. But when Daniel Eilersen, the class know-it-all, starts acting all high-and-mighty, Justin thinks he can scare him by performing a magic ritual from the ancient book he's stolen from his granddad's study. His friend Trevor, who always goes along with what Justin says and his little sister, Joy, complete the group.

It's all about the atmosphere of course and Justin plans to give Eilersen a proper scare, but nothing will actually happen ... Or will it ...? On the old tennis court in the park, late one night, the four of them, unaware of the consequences of their actions, summon Dracherion, a malicious and dangerous spirit bent on revenge for being imprisoned in the ancient book by Grandpa Blake, years ago. Things go wrong and Dracherion breaks out of the circle designed to enclose him. The ritual has bound them to Dracherion and Justin, Joy, Trevor and Daniel know that the spirit will try and possess one of them so it can grow in strength and wreak its vengeance. A terrifying struggle follows as Dracherion grows stronger and stronger. It's a race against time to try and find a way of banishing the spirit out of this world. But how do they do that when one of them can't be trusted ...?


This is hands-down one of the scariest novels I have read.  It's aimed at younger readers but there is a grown-up quality to it that just refused to let go.  E.E. Richardson's writing is vivid, down to earth, with little exposition.  We are introduced to the characters swiftly and without much fuss and honestly, within the first two pages you just know things are going to go badly for these four.

The synopsis above, taken from Fantastic Fiction's site, gives you the basic background of the story, so I won't harp on about that too much.  What else is there, you may wonder.  Well, we have some great characters at play here - Justin is the main character.  He's a bit arrogant, a bit full of himself and convinced that is way is always right.  In this instance he takes after his dad, quite a bit.  Joy, his sister is the voice of reason but she is young and although she is a bit stubborn, she is easily lead.  Trevor is the wet one - he seems a strange kid from the word go.  He doesn't seem to have much personality.  He could be anyone and although he occasionally raises his opinion, no one takes him seriously.  I really didn't like him.  He was grey and unattractive to me as a character.  Daniel on the other hand bristled with arrogance and knowitall vibes.  Opinionated, intelligent and studious, he is the perfect foil to Justin's hot-headedness.

It makes complete sense that there would be some major personality clashes in the book and I liked it.  It drove the story forward and helped with the tension between the characters.  It helped with the suspicion too - who is the one who has been chosen by Dracherion to be the vessel?  It could be anyone. Which one of the four sneaked out to scratch weird symbols on Justin and Trevor's front doors? Why has Justin started sleepwalking and why can't he remember doing so?

All clues pointed to Justin being the one under the sway of the entity that came through.  He is acting irrationally and has problems controlling his temper.

In the limited time they have, the four of them sneak around, trying to figure out how to stop Dracherion and put him back in the book, the box, whatever they can find to contain him.

The novel only takes place over say two / three days maximum and yet it feels both longer as well as far too short.  A lot happens in this short space of time.  The kids really have their perception of the world rocked and to give them their dues, they are keen to sort it out, but will their plans work?  And will everything end well?

This is a pacey thriller written by a spectacularly devious mind and I for one am looking forward to reading EE Richardson's other offerings. I'd highly recommend this to readers who are perhaps slightly on the older side of the YA range, unless the younger lot feel adequately brave that they can take a bit of psychological supernatural horror.

The Summoning has been out since 2007 so should be available to find online and in various good bookshops.  EE Richardson is published by Random House Children's Books.
Who wrote this? Liz at 9:34 am

That really does sound like my kind of book. I don't like full on horror, but a spooky scary story I love. Thanks for bringing this one to my attention. It's good to find out about the older books too :D