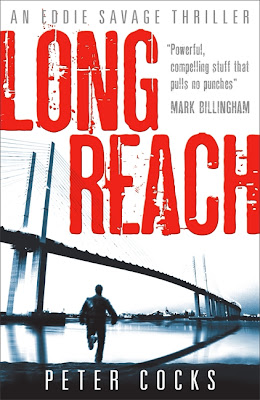 Eddie Savage makes 2 shocking discoveries in quick succession.  One: his brother Steve has been working undercover for the police.  Two: Steve is dead.


Eddie refuses to believe that his hero elder brother killed himself and there's only one way to find out the truth: follow in his footsteps.


Before long, Eddie is up to his neck in Kelly business...and sinking fast.

I went into reading Long Reach not quite expecting the brutality and in your face violence and matter-of-factness of it all.  It surprised me but it didn't put me off.

Far from it.  I couldn't wrap my mind around the maturity level of Long Reach.  I really couldn't believe what I was reading was aimed at teens.  It read on par with any mature thriller for adults and in some instances, it was even more in your face.  I was taken aback because even though I had been warned, I wouldn't let myself believe that someone had the guts and the brass monkeys to sit down and write something so in your face real for a younger audience.

The author pulls no punches.  Eddie comes from a rough place and the place he's going to is rougher still.  When he's recruited shortly after his brother Steve's funeral, he undergoes a rigorous bit of training that had me wincing.  He got the snot kicked out of him but he makes it and I cheered for him.  Eddie is a great character with tremendous instincts and a strong voice.  Reading his story had me so involved, I couldn't wait to absorb all of the book.

Once he got his training under the belt, his under cover operation gets underway.  It seems simple enough: make friends with Sophie Kelly.  The cops have set Eddie up in a nice enough place and they've given him his undercover story and set him on Sophie's trail.

Things go perhaps a bit too well.  Eddie has the courage to walk up to Sophie and actually talk to her.  There are rumours that the previous guy that she dated got himself tossed out of a parking lot for touching her bra.  He's on shaky ground but he's himself and Sophie likes what she sees and agrees to see him.  And so things continue until Sophie feels it's time to meet her parents.

The book moves rapidly but without once losing sight of Eddie's emotional state and the trouble he's in.  We get a full picture of who Sophie is, her mum and more importantly, her dad.  The Big Bad.  And what I liked is how I could understand Mr. Kelly's motivations in some instances and how easily it would be to be a young man in Eddie's situation falling for it all.

I loved Long Reach.  I loved the reality, the grittiness and Eddie above all is just such a believable character.  I never once doubted his honesty, integrity, his willingness to take one for the team.  When things start unravelling I had to walk away from the book because I just couldn't cope with the tension.  Then I couldn't bear not knowing what was going on.  Such powerful emotions can only mean that the author did what he set out to do: he hooked me 150%.  I was constantly emailing the poor publicity people who took it with good grace telling them how awesome the book is and how I want to build a shrine to Peter Cocks.  They took it all wonderfully well.  Thank heavens.

Long Reach really blurs the distinction between right and wrong and explores the darker uglier grey side of things where matters become so on the cusp of either side...it left me wondering how I would act in situations such as Eddie finds himself in.

This is a very short review for me - and honestly, I can go on for days about Long Reach.  Buy it, read it, love it.  It is fantastically good.  This is what Ales Rider and Young Bond was supposed to be like.  Dark, gritty, hyper-real with characters that feel like your best mates, even if you are a good guy / girl.

Long Reach is not recommended for the younger range in YA but rather for a more mature YA audience and will have great cross-over appeal for readers who like thrillers and crime novels by people like Mark Billingham and Marina Cole. There is sex (behind closed doors, but it's there), violence (quite nasty and real), drugs (implied and shown) and yet none of it feels gratuitous and I take my hat off to Mr. C's editors and the author himself for keeping a tight reign on the story as it so easily could have spilled out of control.  Instead we have a deeply thoughtful, action packed crime thriller with a new protagonist that will please both male and female readers as you would either want to date Eddie or be his best mate.

Listen to me: buy the book.

Find the excellent Mr. Peter Cocks's website here.  Long Reach is out now from Walker Books.
Who wrote this? Liz at 8:00 am

Sounds like a great read. Thanks for the recommendation!

Wow. What a fantastic review! Just so you know we've posted a potential Long Reach Soundtrack on our blog for anyone who's interested, and a Q+A with Peter Cocks will go up there soon as well!

Thank you so much.
This spells out everything I intended to do with Long Reach and to hear your feedback tells me that I was right in making no compromises. I am very grateful for your comments.

I wanted to write an adult level thriller with engaging, teen protagonists: Young adults, old adults and everyone in the middle are watching Skins, Inbetweeners, Spooks and other TV shows that blur the genres and the boundaries.

The second Eddie Savage book is well underway and you have inspired me to continue with renewed vigour!

Now...may I help build that shrine?