The Immortals: Evermore by Alyson Noel 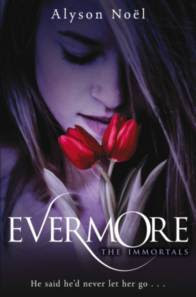 Synopsis
Seventeen-year-old Ever is the sole survivor of a car crash that killed her entire family. Living with her aunt in Southern California, she's plagued by the ability to hear the thoughts of those around her, and haunted by the ghost of her little sister. She tries to tune everyone out, shunning her old lifestyle as the pretty, popular cheerleader, but somehow she can't hide from Damen, the new guy at school. Stunningly handsome, clever and not a little bit intimidating, there's something about him that doesn't quite add up. Ever realises he's hiding something, but nothing could prepare her for the truth - especially when the truth involves past lives, murderous enemies, everlasting love and the secret of eternal youth . . .
The Immortals series is one that I always meant to get around to reading. However, despite numerous people telling me it was their stand-out favourite YA paranormal romance series I still hadn't started it. However, as this is the year that the story draws to a close I thought I'd better hurry along and get to it.
Liz has already reviewed Evermore here but as I'm starting the whole series from scratch I thought I'd review it too. From the beginning I was pretty sure I had Evermore sussed. I was convinced I knew what was going to happen and how it'd all turn out. I got to a certain point and realised I was wrong and that smugness gets you nowhere - but more of that later.
Ever Bloom has had a rough ride; sole survivor of a car accident that killed her whole family and forced to start over in a different part of the country. At school she's seen as a freak and instead of wearing her cheerleading uniform with pride she's taken to covering up and wearing her ipod headphones 24/7 so she can block out the thoughts of her classmates. One unfortunate side effect of cheating death was becoming telepathic. But them Damen arrives at school and she can neither sense his aura or read his thoughts, plus the fact that there's something else about him that she can't quite pin down.
I loved Ever from the beginning. It's not uncommon for the main character to be bottom of the heap with hidden talents or for a hot boy to arrive on the scene. Somehow Evermore makes these themes fresh and exciting. And now for my misplaced smugness. I thought I had Damen pigeon-holed into his paranormal place but again, Evermore surprised me offering something fresh and different. Although Ever has a lot to deal with and does get maudlin I never felt cross with her. I found the way she dealt with her loss and grief incredibly touching and well written.
Aside from Damen my favourite character was Riley, Ever's ghostly kid sister. Forever frozen in time at the age of twelve she spends most of her time with Ever trying to live her dream of becoming a teenager. Riley's perfectly bratty, loveable and responsible for some of the most bittersweet moments in the book. Aside from Riley there's the suitably hateful Drina who leads Ever's friend Haven astray. Haven and Miles are Ever's only friends and they occupy the z-list table in the cafeteria at school.
Far too much goes on in Evermore to fit into one review. It tackles grief, identity, self-confidence, virginity and so much more but also does it with style. I found this book ridiculously addictive too and was glad to be able to reach for the follow-up (Blue Moon) as soon as I'd finished.
Who wrote this? Essjay at 7:22 am

This is one of those series I keep meaning to read too.