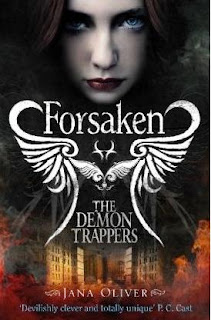 Riley Blackthorne. Kicking hell’s ass one demon at a time . . .


Riley has always wanted to be a Demon Trapper like her father, and she's already following in his footsteps as one of the best. But it's tough being the only girl in an all-guy world, especially when three of those guys start making her life more complicated: Simon, the angelic apprentice who has heaven on his side; Beck, the tough trapper who thinks he's God's gift, and Ori, the strikingly sexy stranger who keeps turning up to save her ass.

One thing’s for sure – if she doesn’t keep her wits about her there’ll be hell to pay . . .


**Very slight spoilers**
When we meet Riley Blackthorne she’s in a library trying to capture a Biblio-Fiend, a minor demon that has escaped from Hell, who has a penchant for burning books and causing chaos in general when it comes to printed matter. Let’s not talk about the thousands of dollars worth of damage it could do to rare editions! I am immediately engaged in the story from that opening scene - any bad thing happening to a library has all my attention immediately. Add to that the supernatural slant of a demonette running loose and I’m on guard like a pointing dog in a hunt. Add to that a teen doing her utmost to take on a denizen from hell and I’m very much engaged.

The opening scene is amusing, it’s real and winsome, it immediately sets the tone of the novel and introduces Riley to us so that we know who she is, what she’s doing and what she has to lose if she doesn’t pull off this capture successfully.

She pulls off the capture semi-successfully and has to face some nasty consequences. As Riley’s life comes into sharper focus and we realise it’s not all laugh out loud funny moments and a bit of silliness, and we see a completely different side to Riley. She literally has to (wo)man-up to her responsibilities and admittedly she does a few truly stupid things but then, being dumped on her own after her dad is brutally killed, does tend to screw with one’s head, no matter how levelheaded and realistic you’re trying to be.

When we meet her, she’s a bit pampered (not much) but I got the idea she was not as aware of the harsh realities of the world she finds herself in as she would have liked. Her dad did form quite a bit of a buffer between her and the real world. She knew some of the difficulties they faced but did not perhaps quite grasp how difficult life was for her dad as one of the foremost demon trappers in the area, as well as raising her and the financial debt they were in due to her mum’s death and illness. So when he dies, everything Riley knows is taken from her. She has only herself to rely on as the trapping community see her as a bit of a freak. There are no female trappers, she is the only one, so like all girls and women in a man’s world, she has to work that much harder to prove herself. And weird things are going, things like: demons never work together, yet Riley knows that she didn’t just fight a Biblio-Fiend at the library, something else was there too. And the demons know her name - they mention it each time they see her. It’s creepy and it worries her a bit but it genuinely concerns Beck, who is her father’s trapping partner and Riley’s erstwhile crush (when she was much younger).

Beck is one of my favourite characters in TDT:F. He is aware. There is no other way to describe him. He looks out for Riley, he has contacts with various people in the town and he is clever in the way he sources information about what is going on in the area. He plays the game well, holding a front of someone a bit insolent, a bit slow, a bit Southern, whilst watching and gathering information. It’s this that I find so interesting and I think it is a risk that Ms. Oliver took when writing Beck in this way. He is the bad boy, but with reason and is genuinely someone I would love to have on my side in a fight.

Simon on the other hand, who turns out to be apprenticed with Riley to the same “master”, Morgan, is the guy who toes the line, he follows the rules. He’s religious, he’s truly lovely and sweet and generous and completely into Riley. He is almost too nice. He is a paladin, the knight on the white charger and I tried my best to not like him too much. It would have been so easy to make him a victim, but Ms. Oliver walks away from that and instead she works her magic, revealing that there is a darkness in him that when it is revealed for one of the briefest seconds, it really jarred me and took me by surprise. I loved it. And completely believed it. And liked him more for it.

Surprisingly there is very little animosity between Simon and Beck. They understand each other more than Riley understands either of them or herself sometimes and I liked that too. And even though there isn’t a lot of animosity, it doesn’t mean that the boys are bff’s or anything, there is just enough tension to keep it interesting. Then we have the very mysterious Ori...who I’m not even going to guess about. I have some ideas as to who he is, but am happy to wait and find out in book 2.

I must apologise for not going into the story more - there are various strands, some of which get tied off but some that answering in the upcoming books.

Riley is a great character. Always moving forward and never backing off an inch - you may notice that this is something I love in heroines. She is determined and a bit of a terrier. Once she’s got something in her mind, she does not give up. I utterly approve of her. She’s a great urban fantasy heroine and has a tremendous character arc in Forsaken, the first book in The Demon Trappers series of books.

Stick around for an in-depth interview with both Riley and Jana Oliver, creator and godlet of Riley’s world tomorrow.
Who wrote this? Liz at 8:14 am

I do love a tough cookie for a heroine. Riley is a character I will love.Great review.

I have skimmed your review as I have it in my TBR pile :D
I cannot wait *shuffling books*

This sounds like an awesome read and let's be honest you had me at the word bibliofiend! Plus isn't that cover pretty :D