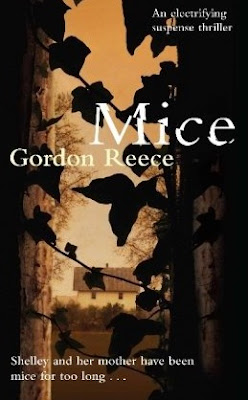 I really didn’t know what to expect from Mice, at all. I was a bucket full of doubt, not sure which way the author was going with it or what the outcome was going to be. In the end I told myself to shut the frack up already and get on with the reading of the book.


The entire novel is told from Shelley’s point of view. It is a very dark, very intimate novel and as such, a bit of an exhausting albeit excellent read.

Shelley’s story begins when they move into a remote cottage in the countryside, far away from everyone. Shelley’s being home-schooled as they have been advised to keep her away from the local school where the “incident” had happened. The authorities take great care to not let on where their new home is, for fear that the children who had taken part in Shelley’s bullying find out where they had moved to.

Shelley’s voice never wavers as she tells her story – we are filled in about the “incident” and about her parents splitting up before that and how her mum practically lay down and died instead of fighting for what is hers during the divorce. It drove me crazy, just a bit.

Yes, there is exposition, quite a bit of it, and I grew a bit tired of it but can honestly say that without that exposition, I wouldn’t have understood Shelley or her mum half as well as I did at the end of the novel.

The exposition takes us through Shelley’s incident with the bullies at school. It is told in a very matter of fact way. I think it wouldn’t have made such an impact on me had her telling of it been a bit more hysterical. Instead we get a very level, very logical and reasoned explanation of events, the run up to the attack that left her scarred and the aftermath, including the move to the countryside.

The period at Honeysuckle Cottage is almost too good to be true. There is an amazing dreamy quality about their lives. It’s almost a nostalgic 1950’s blurry image of how people’s lives are in real life. Shelley and her mum are close and they grow closer still. But they are still mice, still timid, but even in their timidity, they laugh and cook and devour rich meals they prepared together. I willed this not to change. Shelley was acting as a mini-adult – never breaking out and doing something teen-like and it worried me. She stayed in, listened to music, played her flute, spent a lot of time with her mum and only really exploring the outside of the cottage in a tentative way.

I’ll be honest. I did not really like Shelley or her mum. I didn’t like that they were victims. Not only did they see themselves as victims and called themselves mice, they acted in the exact way that made them victims and mice. It’s sort of pushed down your throat that Shelley and her mum always managed to get the short straw. In the end – as much as I hated it – I began identifying with them, seeing their point of view and rejoicing in their tiny victories. I didn’t like it but couldn’t help myself. I was so drawn into Shelley’s narrative that I couldn’t break away.

Then, the night before Shelley’s sixteenth birthday, an intruder gains access to their idyll. A smelly, drunken drugged up oaf who tie up Shelley and her mum. Afterwards he blunders through the house, stuffing items into his bag, making a mess of things.

Shelley’s mum is terrified and unable to move. Shelley however is equally terrified but her fear turns into anger. It’s as if a switch flicks on in her head and we watch her turn from mouse to something altogether different. Predator perhaps? Or victim in another sense.

Needless to say, her actions when she manages to get loose , complicate matters for them. They try and tidy away all trace of the awful intrusion and to continue with their lives, trying to be bland and unassuming.

But the incident has shaken something loose in both women. They’ve cracked open the shell they’ve been living in and start standing up for themselves: Shelley speaks up for herself when her one tutor implies that her bullying and scars are nothing to whinge about; her mum refuses to work overtime for no pay at her office and she even slaps her boss for his unwanted attentions.

As before there are a few weeks of euphoria for Shelley and her mum. They have come out of the ordeal stronger, tougher, more confident. But also very different characters.

One further incident happens, one I won’t give away, but as it is resolved, and the book nears its ending, my blood ran cold. I knew how it was going to end I realised! And it does and yet I’m not let down because the ending is perfect. Well, in theory, it’s not a perfect ending but it leaves Shelley and her mum in exactly the place they need to be. Just thinking about it gives me this ominous shiver down my spine.

Mice is a finely crafted psychological thriller. In fact, it is part thriller / part literary examination of bullying and physical and mental abuse and the consequences it has on the victims and what would happen if those victims start standing up for themselves and fighting back. But not in the way you or I might expect.

A word of warning though – Mice is an exhausting read. It has some truly lyrically beautiful moments but it is a tense novel with a great payoff. But it is dark. Just in case you got fooled by my review.

Mice is out on the 18th Feb from Mantle, an imprint at PanMacMillan. Find Gordon Reece's website here.

PS: I've been thinking about this and I do think Mice is YA too, especially as the main character is a teen. A lot of what she's going through, many teens will be able to identify with.  So I'd also recommend this to older, more mature teens who like darker fiction - there is no romance and it is quite brutal in some parts, but it is still an excellent read, especially if you're an aspiring writer yourself and you are wondering how to ratchet up the tension.  Mice is text-book worthy good.
Who wrote this? Liz at 8:35 am