Fall of Damnos by Nick Kyme 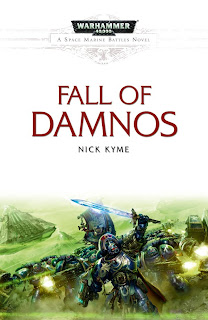 ++ ... All is lost, casualties presumed near total. Only Kellenport remains. As Lord Governor, recognised by the High Lords of Terra, I beseech all Imperial servants receiving this message to come to our aid with all haste. May the Emperor shield us.

Scant information exists on the invading force save for a binaric data-burst. Transliteration follows: "We are the Necrontyr. We are Legion. We claim dominion of this world. Surrender and die." ++

It begins with the discovery of a mysterious metallic object in one of the countless mines of Damnos, a prize irresistible to the tech-priests in attendance. The excavations begin, and the Necrons stir from aeons-long slumber beneath the surface. Implacable and merciless, the legions of living metal begin their reclamation of Damnos and the eradication of all life thereon.

Enter the 2nd Company of Ultramarines, led by the ambitious, charismatic Captain Sicarius. It's a chance for the Company to earn immortal glory, but at what price?

The action comes thick and fast, as befits the Space Marines Battles Series (the clue's in the name) and while Nick is very good at putting you into the thick of the savage brutality of the combat, what really makes Fall work is his treatment of the cast of characters. Each is given a clear identity and perspective, thus avoiding becoming just another cobalt armoured gun plodding along. A bit of backstory goes a long way.

And on that point it's interesting to see Nick poking around amidst the unstable psyche of the Necrontyr, a faceless, terrifying foe, making them more than a genocidal army of Terminator/Dalek hybrids, infusing them an air of a long forgotten tragedy.

All in, Fall of Damnos was a non-stop action blast, but one that offered a lot more than I expected. More like this please!
Who wrote this? Mark at 9:00 am