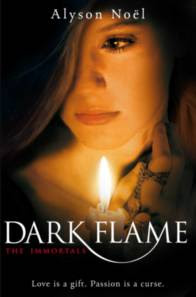 WARNING: CONTAINS SPOILERS FOR PREVIOUS BOOKS IN THE SERIES.
Synopsis
Once it seemed being immortal was a gift to Ever Bloom - now it's a curse. And she's a danger to herself.

Ever has been dabbling in Magyck - seeking to explore her own powers, hoping to find a future for her relationship with Damen. But she's not in control - in fact, the magyck has bound her eternally to her immortal enemy, Roman. Whenever he's near, she feels his heartbeat, his breath, his blood racing in her veins. Ever is in deep - and the one person who might be able to help her must never find out what she's done . . .
The events of at the close of Shadowland were dramatic and meant that Dark Flame opens with a great deal for Ever to deal with. To begin with Haven is making things very difficult and if Ever isn't regretting her choices then I certainly am! Haven really transforms in Dark Flame and her actions put a strain on everyone she knows. Dark Flame is also the book which had me almost screaming, "Noooooo!" at Ever on multiple occasions. In Shadowland I felt that Ever had really grown as a character but that was nothing in comparison to her growth in this book. However, I'm getting ahead of myself.
Ever's difficult decision at the end of Shadowland has far-reaching results in Dark Flame. Although she made her decision with the best intentions it does raise the question which runs throughout this book whether it is better to leave things to fate (or nature) or to intervene using supernatural means. Messing with the natural course of events is dangerous and Ever makes this mistake time and time again. Roman is a brilliant baddie and, if it's possible, he's even more hateful in this book. Ever constantly makes decisions which leave her isolated and she always seems unwilling to accept help (queue more yelling from me!).
Miles is heading to Florence to attend an acting school over the summer. Incidentally, Miles is becoming one of my favourite characters; he's loyal, funny and has steadily grown in confidence as the series progresses. His trip has got Damen a little worried as there's so much of his past in Florence that Miles could discover. Haven and Ever start to grate on each other as Haven finds herself drawn closer to Roman. Unfortunately, Ever's attention is not entirely taken up with Damen. In fact, Ever makes some awful decisions as she finds herself looking for a quick fix for her problems in magic.
I haven't even mentioned the role that Summerlands play in this book. It becomes apparent that they're not just a happy and harmless place of manifestation but that it holds the answers to life's problems and more. Ever's meddling with magic gives Dark Flame a sinister feel but her solution wasn't what I expected which seems to be one of the themes of this series. An exciting instalment that doesn't disappoint.
Who wrote this? Essjay at 7:34 am