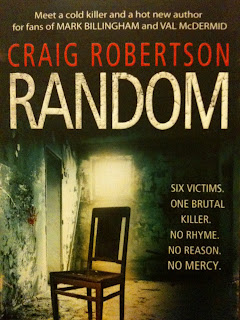 Glasgow is being terrorised by a murderer the media have nicknamed ‘The Cutter’. But how do you catch a serial killer when even he doesn’t know who’s next?

Telling the story in his own words, The Cutter reveals the method, and motives, that drive him to kill again and again, in an escalating spree that leaves DS Rachel Narey and her team mystified.

I don’t normally read much crime fiction, but what hooked me was the idea of the story being told from the killer’s perspective- it’s not something I’d come across before and the concept appealed to me. It’s a different approach, and a daring one. I was intrigued to find out how Robertson would build The Cutter’s character, and balance the grim reality of him being a serial killer while making him someone you want to find out more about.

The Glasgow that the Cutter inhabits isn’t a pretty one; it’s claustrophobic, grubby and tired, even more when seen from his emotionally estranged point of view. Even though his victims are chosen at random, not all are innocent, and one death sends ripples through the seedy underbelly of the city that he skirts, and soon it isn’t just DS Narey that’s hunting the killer.

The story doesn’t veer away from The Cutter though, and as he stalks his victims, Robertson teases out the story of how he came to become a killer and what his ultimate goals are, and its asks the question whether successful killers are born or sculpted into something dark by the cruel vagaries of fate. It’s well done and, combined with a storytelling voice that’s very easy to get along with, it really engendered that ‘just another few pages’ feeling and saw me muttering angrily when my train pulled into my station, forcing me to put the book back in my bag.

While Random will no doubt do for Glasgow’s tourist industry what Jaws did for beach holidays, it’s a fast paced and bloody entertaining book and well worth a read.

I hope DS means Detective Superintendent, like I think it does. And not Deep Sh*t, that I always will think about when I see it...

-Did I mention I need more coffee?

I'm really into crime books at the moment, so I may just add this one to the list! Thanks :)

Definitely I would look out for this. It really sound very different. Every we play the judges and moralist, damning the perpetrators. It's time we listened to them too.