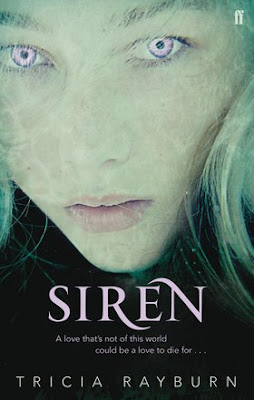 Timid seventeen-year-old Vanessa Sands has always had her sister Justine to protect her. Until Justine is found dead near their holiday home and her boyfriend Caleb goes missing.

As Vanessa delves deeper into Winter Harbour’s murky past she discovers that nothing is what it seems. Not even her. And only she may have the power to stop this.

Will she find the courage to face up to what she really is - before Simon becomes the next victim?


It took me far too long to pick up Sirens. And once I did, I couldn't not finish it. I wanted to tell the world about. I emailed poor @esssjay and waffled on at her about it for ages. She needs a gold star for putting up with me.

So, here I am today to gush at you about Siren. Firstly, that cover is just amazing. I wondered if the writing would live up to the pretty cover and it does. It lives up to it and it surpasses it.

Ms. Rayburn's writing is clear, concise and without much frippery. Her writing echoes her main character, Vanessa's, no-nonsense attitude. Admittedly Vanessa is pretty much like me, actually - scared of heights and not very good at doing things impulsively. Unlike me she has a great many other fears too. It makes her a slightly anxious person and she's forever looking for reassurance and gets it from her sister Justine. Justine is the complete opposite to Vanessa. She's loud, pretty, funny, gregarious, always up for doing something silly and perhaps a little bit dangerous. She loves Vanessa to bits and goes out her way to make sure her younger sister is looked after and safe.

So when Justine disappears and her body is found battered and washed up on the beach and rocks near their holiday home, Vanessa needless to say is deeply traumatised. At the funeral she can't shake the feeling that Justine is there, talking to her. She feels like an outcast, looking in. Her mum is desperate for things to go back to normal and immediately returns to work. Her dad is the absentminded writer but probably the keener eyed of the two parents. He shares a good relationship with Vanessa and when she decides to go back to their holiday home by the lake he backs her up.

For Vanessa to do something like is momentous. She's a bit shy and a scared person, but she is also stubborn and keen to figure out what had happened to her sister. Everyone assumed she drowned herself by jumping off the cliff. Vanessa however knows that although Justine was reckless at times, she wasn't stupid.

Back at the holiday home, Vanessa teams up with Simon, Caleb's brother, to not only try and find Caleb who had gone missing, but also to figure out what exactly was going on in the area, what with so many people (specifically men) dying. And of course they want to puzzle out what was going on with Justine too.

Siren is a whodunnit with an edge of the supernatural thrown in. The romance between Simon and Vanessa is slow to start and quite sweet but it is not the main focus of Siren. The main focus is Vanessa's growth as character and her slow realisation that everything she had known about her and Justine is so far off the charts that it actually can't be explained in a normal way. We watch Vanessa go from a quiet, reticent young girl to a young woman of courage, grace and determination.

The writing stands out because it is very engaging - Vanessa's voice rings true. I faltered a few times myself, whilst reading it, thinking that maybe one or two of her actions was not as believable as I'd liked, but then when reading further, it became clear what was going on.

Simon is also a great male character. Maybe a bit underdeveloped but it is his scientific research and obsession with the weather, that gives them some of their best leads. His loyalty to both Caleb and Justine is remarkable and I loved that in him. When he eventually plucks up the courage to kiss Vanessa I cheered a bit. You want this guy to succeed. He's nice. A decent guy who should get the girl

Caleb's character remains a mystery for quite a part of the novel but we are drip-fed information about him and by the time he is on the scene, he has all our attention and empathy. Another great character and one written with great sensitivity. I think I'm in like with him a little bit.

Vanessa and Simon's exploration of the myths and lore around the area the story takes place is nerve wracking. I expected Bad Things to happen to them all the time. From this you can deduce that the novel was tense, and it was. The author kept a steady hand on the undertone of growing menace so that when the turning point comes you throw yourself right in after the characters, hoping for the best.

I enjoyed Siren. I thought it was well written and it breaks the mould for supernatural YA as the focus is not the romance, the focus is the story and the character growth. Sadly however, this is not a standalone. I say sadly because now I have to (im)patiently wait for the next book to come out and although the novel didn't end on a cliffhanger, a lot of questions went unanswered and it's driving me slightly crazy not knowing what's going to happen. Sigh!

Siren is out now from Faber & Faber. Find Tricia Rayburn's website here and her blog here.

Oh, I've just popped by Tricia's site and seen her US covers which are gorgeous! Look at them: 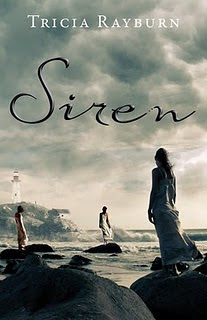 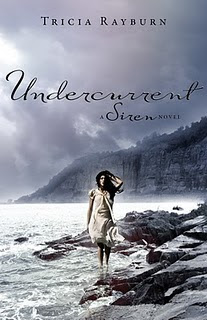 I bought this one for my Kindle a while back. I wish I could get to it. Soon hopefully. It sounds so good!

Great writing ... Covers of this book are beautiful, but I also do not like bland endings or unfinished books. So rare - outside of science fiction - I read a few volumes of one story. Oh! These covers are truly wonderful :)
Ps: Forgive me, if my language is incorrect, anglish is not my native lang.

I read this one a few weeks ago & really loved it, definitely a great story that had me on the edge of my seat wanting to read more!

I really want to read that! I think that all of the covers are beautiful, and make the book more encouraging to read!

This sounds great :) You've made me add to my list again :p

I despair each time i come back to your site. I am out of the country now and new books seem so difficult to come by. LOL.. The bane of a reader I guess.

Oh I loved this one as well! I loved Simon as a love interest, so very nerdy but also really protective. I cheered when they finally kissed too. Dying for the sequel now.

I was seduced by the cover in Tesco - I really should not go down the book aisle but the trolley seems to go there on autopilot :D