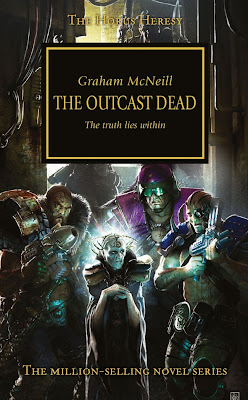 I'm very leased to be able to introduce Sarah Cawkwell's guest review of the latest instalment of the best-selling Horus Heresy series. We've been chatting to Sarah (a.k.a @pyroriffic) for some time now and have vicariously shared the giddy excitement of her induction into the ranks of the Black Library's team of authors (more on that below).

With that thought in mind, I thought it would be interesting to have her perspective on The Outcast Dead. So, without further ado...

The Outcast Dead
A spoiler-free review by Sarah Cawkwell
It may come as no surprise to those of you who know me to realise that one of my favourite traits in any character is a tendency to a delicious brand of grumpy, self-inverted sulkiness. Oh, angst. How I love you. (Not the brooding, sparkly Twilight kind of angst, but the proper ‘I’ve really suffered’ kind). Don’t ask me why; it’s a trait I find incredibly irritating in real life. But I like my heroes to be less than likeable and to be packed to the gunwhales with personality flaws and nuances. It’s some kind of inverse physics thing, perhaps. The less inherently likeable a character, the more I seem to like them. It's similar to my theory on the fact that the smaller the handbag, the more rubbish you can fit in it.

Whatever the reason, I am filled to the brim with undying love for Kai Zulane, one of the central protagonists as featured in Graham McNeill’s latest addition to the million-selling Horus Heresy series. The Outcast Dead is set almost entirely on Terra and is a 'Meanwhile...' piece. It opens the eyes of the reader quite widely to life elsewhere in the Imperium whilst the Adeptus Astartes are going through the wringer millions of miles away. It primarily follows the (mis)adventures of an unlikely hero in the shape of an astropath who is the unwilling carrier of a vital message. This message must be delivered at all costs and he falls into the care of an even more unlikely and largely reluctant band of protectors.

There are other plots woven neatly into the story as well, with some excellent cross-over and more than one or two surprises.

Because this is a spoiler-free review, I’m going to come straight to the point here. I liked this book. It reads well, has a great story that reaches a satisfactory resolution and a brilliant cast of great characters (including the aforementioned astropath). But I may be biaised. I have a particular love for character-driven stories and also for astropaths and psykers of any kind, so for them to form the core of a story is my idea of a good time. It’s like a party that just won’t quit. There is a delicious mix of psykers you like and psykers you don’t. And then the eponymous Outcast Dead of the title are thrown into the mix and it all goes a bit wild and crazy.

Which is no bad thing in my opinion.

I’ve always found the illustrious Mr. McNeill presents characters with whom it is easy to engage, although not always necessarily easy to identify with. I’m unlikely to ever be an astropath, for example. This both pleases me and in my nerdier moments, invokes a certain air of resentment. Because apart from the down side of, you know, losing your eyes, your identity and all the other stuff… you’d be an astropath. Which would be kind of cool. Sucky, but cool.

I digress. I do that.

With The Outcast Dead, readers are treated to an entirely different side of the Heresy. Away from the militarian, organised lives of the Legiones Astartes, ordinary citizens are going about their business… but this is a world in which things are constantly changing, where the bad guys are evolving all the time (sometimes quite literally)… and the ordinary soon morph into the extraordinary with disastrous consequences for our protagonists.

This isn’t your average Horus Heresy book. Whilst there are Space Marines present and at least one primarch puts in an appearance, there is a distinct absence of full-on battle scenes. For many, this may cause them to dismiss the book out of hand. But for all those people – and there are many of them – who often bemoan the fact that the Black Library don’t publish books that are more character driven… well, they should grab this one.

It’s quite heartfelt in places and as a reader, I appreciate it when I genuinely care enough about a character to care what happens to them. By the end of the book, my initial fondness for Mr. Grumpy had gone all the way through deep pity and out the other side into enormous respect.

It’s a tale about courage and determination, about understanding one’s duty, about loyalty and even about friendships in the face of the worst kind of adversity. It adds gently to the Horus Heresy mythos without scrambling anything and also clears up one or two other grey areas with well-placed exposition.

I have enjoyed all of Graham McNeill’s contributions to the Horus Heresy series so far and The Outcast Dead is no exception. Will it please everyone? No. I don’t believe it will. After all, everyone has different expectations and for some, the absence of full scale warfare may lead to a less-than-satisfactory read. For me, though, it was a good, solid story with interesting characters who I cared about. And as far as I’m concerned, if I come out of a book thinking ‘I enjoyed that’, then it’s done its job admirably.
And The Outcast Dead definitely did that. With bells on. I award it nine screaming psykers out of ten.

Thanks, Graham – look forward to the next one.

A great review, thank you!

Sarah's first novel, The Gildar Rift, is out in December, and you can follow her on Twitter, or visit her website.
Who wrote this? Mark at 7:45 am

Only up to chapter 4 at the moment (I received my pre–ordered delivery extremely late), and already I love Kai Zulane. Looking forward to the rest of this. So far I cannot understand why so many people have poopoohed this book.