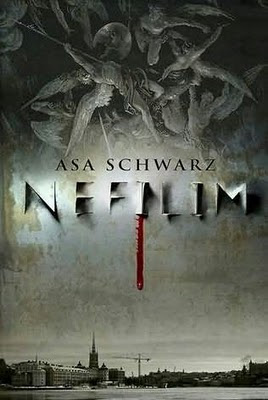 Nova Barakel, a Greenpeace activist, breaks in to the President of the biggest power company (Vattenfall) in Sweden to spray the apartment with words like murderer and blood money. In the apartment she discovers the man, together with his wife and dog, dead in a brutal and sadistic way. Soon another corporate president is murdered.

Nova becomes the lead suspect in the crime investigation and is forced to flee the police. At the same time she has to deal with her mothers recent death, whom she had a complicated relationship with. Mysterious events links her mothers death to the brutal murder.

Nefilim is by the Swedish author Asa Schwarz and because it is written in Swedish and translated into English by the same person who translated the Larson books, it should already tell you that this is not your average YA.

Nothing about this book follows the usual YA trend we have seen in the UK & US and further afield.  I would be inclined to say that it isn't YA so much as a big cross-over into the adult Crime / Thriller market and it really should be stocked in those shelves too.  It is easily one of the most tense and strange books I've ever read.

Nova, our nominal main character, is the rebellious teen from a quite well-off single-family.  Her mum, Elisabeth, is a lawyer and is a bit of distant character.  Cold and probably a bit unfeeling, you can sort of understand a lot of Nova's hang-ups.  However, when we meet Nova, her mum had just recently been killed in a car crash, leaving her an orphan, with a pending police investigation ongoing to try and figure out how it had come that her mum had driven into a petrol station and blown up, killing several other people at the same time.

Nova's an incredibly strong, very well defined character.  She is both unexpected and unusual enough to be a completely new type of teen I've read about, but enough like some of the girls I grew up with so that I can relate to her, as an adult.

The novel starts with Nova breaking and entering into an apartment, with the sole aim to spray slogans on the walls of the super wealthy businessman's apartment.  What she finds is a mess.  He has been slaughtered, along with his dog and his wife, and their bodies are left to rot in the bedroom.

As descriptions go, it is pretty intense.  And Nova's reaction is completely logical.  She runs, but only after being violently sick.  After meeting up with her two friends from Greenpeace, they decide to anonymously contact the police to let them know about the bodies. They are completely taken aback by the murder and have no idea who could have done it, as Greenpeace does not condone murder.

After this, we move to Amanda, who is a senior investigator in the police.  We meet her during a bad time.  She's battling some kind of awful stomach bug and throws up at the littlest provocation.  She's very much a person who has to be in control and does not like having her facade as the uber-efficient policewoman slip.  When she enters the crime scene in the apartment, she does however, slip.  She becomes violently ill in her brand new designer bag, much to the surprise of her friend Moses, who is a doctor and coroner.  This scene so well describes Amanda - she puts the job first, knowing that she's ill, she still goes in to do her thing, and when the illness threatens the integrity of the crime scene, she chooses to rather be sick in her handbag, than go out and face her other colleagues, and perhaps damage the crime-scene.  Super characterisation.

Amanda is also the investigating officer in Nova's mother's death.  And it is her job to go and tell Nova that the findings were that her mum must have fallen asleep at the wheel of the car, driving home, causing the accident.  When Nova faces Amanda, she is still wearing the orange jumpsuit she wore when she entered the businessman's apartment and without realising, implicates herself in the murder, as Amanda's later investigations reveal Nova's presence, as the orange jumpsuit was so noticeable that a shop assistant identified it.

The story spins out from these dramatic opening scenes and the pace does not let up.  Just because Nova is a juvenile, do not expect the author to hold back on the terror on gore of the subsequent murder or the determination Amanda has to track down Nova and see her behind bars for these attacks.  What doesn't help is an awful reveal about Nova's own past that makes Amanda viciously convinced that Nova is indeed a demented psychotic killer.

It makes for very fast and uncomfortable reading.  The plot is very sophisticated and layered, with a variety of strands I will not be touching on in this review as obviously it is something that you must read for yourself.  There is a hint of the supernatural about this novel, tying in with the title - Nefilim - which relates to the fallen angels at the dawn of time. There is also a massively strong eco-message throughout the novel.  I initially did not expect it - but it forms so much part of Nova's character and her "indoctrination" into Greenpeace, and what she stands for, that it worked genuinely well.  It is a very modern thriller, very mature, with some intimate scenes between Amanda and her lover that stops for the reader just before they do the horisontal tango.  Admittedly, it came as a surprise that it was part of the novel, but then, all does get revealed.  In the end.

It is well written, well paced and importantly, translated in a way that still made me feel like I am reading a Swedish novel.  It is an unexpected gem, and one I am really pleased I succumbed to buying from Foyles during my last trip there with Sarah.  It is definitely recommended for more mature young adult readers and definitely for adult readers who have become fond of Swedish crime novels.  Just because Nova is the main character, and she is a teen, do not expect a gentle romance or anything of the sort. In fact, ignore this review completely if you decide to buy it and make up your own mind.  I can't stop thinking about it and am wondering what the next book will have in store for me.

Find the author's website here. She is published in the UK by Sibling Press.
Who wrote this? Liz at 10:26 am

Been to Amazon and ordered, sounds great. This is why book blogs are my No1 internet read, costs me a fortune, but I get to hear about books I'd have missed otherwise.

And it arrived 30 minutes ago. Good old Amazon.