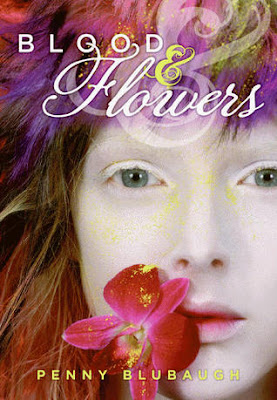 Three years ago, Persia ran away from her drug-addict parents and found a home with the Outlaws, an underground theater troupe. This motley band of mortals and fey, puppeteers and actors, becomes the loving family Persia never had, and soon Persia not only discovers a passion for theater but also falls in love with Nicholas, one of the other Outlaws. Life could not be more perfect.


Until an enemy with a grudge makes an unfair accusation against the group and forces them to flee the mortal world and hide in the neighboring realm of Faerie. But in Faerie, all is not flowers and rainbows—with bloodthirsty trolls, a hostile monarchy, and a dangerous code of magic, the fey world is not quite the safe haven the Outlaws had hoped for. And they must decide what’s more important: protecting their right to perform or protecting themselves.

In Blood & Flowers we meet 18 year old Persia who at an early age ran away from home and is only now starting to settle in with her "new" found family, the boys and girls in the Outlaws troupe.  A group of puppeteers and storytellers, their oddness and quirkiness suits Persia who feels very much the square peg in a round hole everywhere else. They aren't all human though, and quite a bit of their magical puppeteering is down to actual magic.  Faerie magic.

Persia's voice is different.  It took me a long time to get used to it and I admit to it not being my favourite style of voice, but it is interesting and engaging and quirky.  Through her we are shown a world where things are not very pleasant.  Drug use is rife, there is a lot of political corruption and things aren't being done by those in charge for people who live on the fringes of society.  And this is where the Outlaws find their voice.  They create magical shows to send up the establishment, to reveal what is everyone tries to hide, and see it as their duty to enlighten those who do not see what is right before them.

When an old enemy from the two "founders" of the Outlaws shows up and uses his skills as journalist and general main nasty, to make life difficult for the troupe, they decide to travel over to Faerie because surely things can't go as badly wrong there as here, right?

I liked that the faeries were twisty, clever creatures.  Darker than what we've seen for some time.  The threat they pose to human society and to the established order of things, is talked about in the novel.  They are seen as outcasts, as aberrations, as odd and strange and if they are revealed to all of humanity, to come and live in the human world, there is bound to be trouble.  Of course there are those who will welcome them, but there are others who will want to see them shunned, as they are dangerous things from long ago that still scare us.

The book is not at all big yet it tackles important elements such as friendship and family and it shows how family may not end up being blood relatives either, but a group of people who get you and who understand and love you, through all your faults and failings and peculiarities.

It took me a long while to read Blood & Flowers, purely because I wasn't sure about the voice, and I am still not sure.  Elements of it worked really well but I found myself skipping sections, especially where the main character felt she had to make lists to describe things.  It did not ring true, yet I know of some people and friends who do exactly this in real life.

Also, come on.  How gorgeous is that cover?  It has some fantastic elements and I would recommend it for a read but would love to hear what others have thought about it too.  It's a keeper, especially as I am keen to read it again in a few months' time to see if my perception of it has changed.
Who wrote this? Liz at 8:15 am

Great review! I've been wanting to read this for a while, so I think I'll give it a go. And, yeah, that cover is gorgeous!
Hope you had a great time at the OUP event - it was really nice to meet you and thank you for the book!